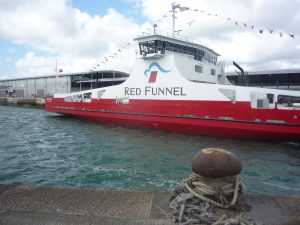 Red Funnel Ferries has welcomed its first ever freight ferry with a traditional ship naming ceremony in Southampton.
Red Kestrel, the newest addition to Red Funnel’s fleet, will be Red Funnel’s first dedicated Ro-Ro freight ship since the company’s inception almost 160 years ago.
Welcoming guests to the naming ceremony, Fran Collins CEO of Red Funnel said, “Today has marked a very special occasion in the history of Red Funnel. It is a prestigious day. The addition of a new ship is always an exciting time for everyone, and Red Kestrel marks an important new direction for us as our first-ever freight ship. With the growth in the Isle of Wight economy over recent years, we had reached a point where we could no longer fulfil the growing demand. Following extensive research, we identified that to increase capacity on our passenger vessels, we would need a dedicated freight ferry to assist with the freight side of the business.
Our investment marks a vote of confidence that the UK and Isle of Wight economies are going to continue to grow and we can support this growth with the additional sailings Red Kestrel will provide.”
Fran revealed she joined Red Funnel on the day of the keel laying and had sincere gratitude for shipbuilders Cammell Laird.
The Rev. Philip Hand undertook the official blessing of the ship whilst Karen George, wife of Red Funnel’s Chairman, Kevin George, had the honour of christening Red Kestrel. Together with the captain of the vessel Islander Ned Tutton they pressed the button which set off fireworks much to the surprise of the invited guests on the dockside at Ocean Terminal.
The Rt Hon Alok Sharma MP, Minister of State for Employment at Department of Work and Pensions and MP for Reading West, spoke on the importance of British craftmanship, supporting local jobs and the revival of world-class shipbuilding in this country adding that the event was a vote of confidence for both Southampton and the Isle of Wight. He and the ship’s Godmother unveiled the official plaque.
Chairman Kevin George said the project was two years in the making and was the third new vessel in the Red Funnel fleet in three years.
Red Kestrel will operate between Southampton and the Isle of Wight and will officially enter service in May. Four round trips could be undertaken by one crew, which will usually, at present, number seven, but only needed to be five if necessary. As a freight vessel, she is limited to 12 passengers the drivers of a dozen trucks. The dozen trucks would free up space on the car-ferry for 100 cars. Red Kestrel has been constructed specifically to provide additional year-round freight capacity for Red Funnel’s Southampton to East Cowes route.
For Captain Ned Tutton his posting is the culmination of a long career on the sea. He was educated at Carisbrooke High School and following training has served on cruise ships before a return to Red Funnel.

Amongst the invited guests to the launch of Red Kestrel were long time Red Funnel customers Steve Porter whose fleet of lorries travel most days across the Solent and Derek Hunt who has been a Red Funnel customer for 55 years. Derek recalled how on one sailing of a previous Red Funnel ferry- Carisbrooke Castle- the crossing time with a good wind and tide was only 32 minutes.  The fruit and Vegetables on Derek’s lorry must have been extra fresh that day!