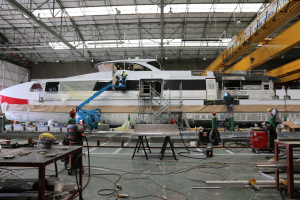 Red Jet 7, Red Funnel’s new Hi-Speed passenger ferry, which is under construction by Wight Shipyard in East Cowes, is due to enter the water for the first time at the end of May.

Work on the £7m vessel is well on track, with the passenger accommodation already resiliently mounted on the two hulls and the specialist job of installing the four engines, generators and waterjets almost complete. The bridge is also taking shape with most of the electronic equipment, control systems and touch screens now in situ and ready for testing. A specialist Isle of Wight based contractor is also about to start the painstaking job of vinyl wrapping the superstructure in Red Funnel’s striking Red Jet livery, which was revealed for the first time on Red Jet 6.

Once in the water, Red Jet 7 will remain alongside at Wight Shipyard Co during the commissioning of equipment and systems. Sea trials and crew training are scheduled to commence towards the end of June and she will be named the following month.

Red Jet 7 follows sister ship Red Jet 6, by offering ground breaking levels of passenger comfort, reliability and safety. She will also be one of the greenest ships in Red Funnel’s fleet with a host of design features to reduce running costs and protect the environment in line with the company’s ISO 14001:2015 accreditation.

Commenting on the weekend, Jonathan Green, marketing and communications director for Red Funnel said: “We are pleased to see this lift in carryings after the poor weather over the Easter holidays. Increasingly, people find travelling to the Isle of Wight from Southampto easier and quicker than driving to other south coast destinations and this is helping to drive future day-trip and short-break bookings in May and June.”