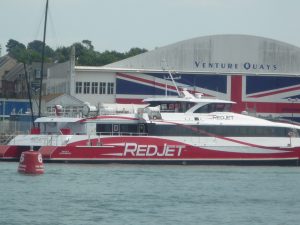 Red Jet 7, Red Funnel’s brand new hi-speed passenger ferry, will be named by HRH The Duchess of Cornwall in Cowes on Tuesday (24th July). This new £7m ship follows in the footsteps of Red Jet 6, which was named by HRH The Princess Royal in July 2016.

Red Jet 7 will be named alongside Trinity Landing at a special ceremony. Festivities will start at 12noon and the naming itself will follow.

Members of the public are very welcome to watch the ceremony from Cowes Parade and pre-bookable tickets are also available for a short excursion aboard Red Jet 7 from 14:00-15:00. All the proceeds from the Sea Excursion are going to Red Funnel’s 2018 Charity of the Year – Isle of Wight Donkey Sanctuary.

Red Jet 7 entered the water for the first time on 6th June at Wight Shipyard Co in East Cowes and has now successfully completed her sea trials and MCA certification.