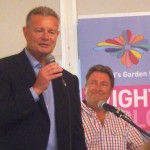 Red Funnel is pleased to announce that it is once again sponsoring Wight in Bloom, the Isle of Wight’s long-running annual gardening competition.

This competition had been a feature in the Isle of Wight calendar for many years but its future looked in doubt in 2014 due to a lack of sponsorship. Red Funnel rescued the competition to ensure the Island kept hold of this horticultural highlight.

Organised by Visit Isle of Wight since 2015, the Red Funnel Wight in Bloom competition encourages Isle of Wight residents, businesses and organisations to work together to plant, prune and dress local gardens and communal spaces for both locals and visitors to enjoy.

This year’s Red Funnel Wight in Bloom competition will be launched on 18th April after which green-fingered Islanders can join in the floral fun by completing an entry form. Applications must be received by 30th May and judging will take place in July.  Awards will be presented by Alan Titchmarsh MBE VMH DL at a ceremony on the Island in September.

Kevin George, Red Funnel’s CEO, said: “As 2016 is the Year of the English Garden and the 300th anniversary of 18th century garden designer ‘Capability’ Brown, we are hoping Wight in Bloom 2016 will be one of the biggest yet. Gardeners of all ages are encouraged to enter one of the 11 categories to help ensure the Island is looking its best this summer.”

Lancelot Brown, more commonly known as Capability Brown, was an English landscape architect. He is remembered as “the last of the great English 18th century artists to be accorded his due”, and “England’s greatest gardener” On the Island he designed the grounds and landscape at Appuldurcombe and for those travelling via a Red Funnel ferry to/from Southampton there might be a glimpse of another of his landscapes at Cadland, Fawley on Southampton Water.

David Thornton, CEO, Visit Isle of Wight said: “The Island’s rich tapestry of heritage and history extends to the Garden Isle and every year thousands of people from across the world are attracted to this natural tourist attraction. Wight in Bloom is a fun way to encourage local people to ‘bloom up’ for the season. This year we are especially keen to receive more entries from children – a sentiment echoed by our Patron, Alan Titchmarsh, at last year’s Wight in Bloom awards ceremony.”

It is hoped that more Island towns and villages will get involved and support the competition which is part of Visit Isle of Wight’s Garden Isle marketing campaign. There is a small fund to help with the cost of plants and it is hoped green-fingered Islanders will pot-up, prick out and support Wight in Bloom this year!

To be in with a chance of winning, keen gardeners can choose to enter one of 11 main award categories from which an overall winner will also be chosen by the judges. For more details and how to enter see Red Funnel’s website.