As per tradition, the spectacular fireworks display held on the last Friday of Lendy Cowes Week will light up the night sky. Lendy Cowes Week is projected to attract over 100,000 visitors to the Isle of Wight between 4-11 August.

While on board, guests can dance the night away to 80’s/90’s classics and take advantage of on-board food and drink specials. Dress code is “anything goes”, from casual, to dressing for a night on the town, to fancy dress.

Supported by donations from Red Funnel and other sponsors, this year’s fireworks display begins at 21:30 and promises a special theme. Cowes Parade and the town are normally packed to bursting on fireworks night, making Red Funnel’s cruise one of the best places to view the fireworks, as the ferry will be situated just off the entrance to the Cowes harbour.

Red Funnel will also operate a similar cruise aboard Red Osprey, departing out of the Southampton terminal at 20:15.

It has been a busy time of late for Red Funnel, not only has the company seen the naming of Red Jet 7 but Red Funnel have supported the recently held Horse Trials held at Osborne House.

The London Capital & Finance Osborne Horse Trials took place 25 – 26 July and saw thousands of spectators enjoy the adrenaline of the equestrian cross- country course, the elegance of dressage and the drama of show jumping in the glorious setting of the grounds of Osborne House.

This event, organised by Bede Events Ltd in association with English Heritage, attracted some of the best horses and riders to the Isle of Wight including Oliver Townend, Ludwig Svennerstal and Andrew Hoy as well as local hero and Team GB rider Sarah Holmes. 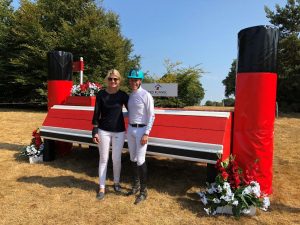 Fran Collins, Red Funnel’s Chief Executive (pictured above with Andrew Hoy) said, “We are delighted to have played a part in the huge success of the first Osborne Horse Trials. It was fantastic to see the top riders and horses compete in such a grand and historic setting and all credit to Diana Bown and Bede Events for bringing the event to the Island – we are already looking forward to next year.”