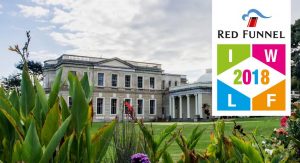 With a rich and diverse line-up of speakers including novelists, historians, correspondents, political figures and media presenters featuring in the programme this year’s  Red Funnel Isle of Wight Literary Festival taking place in Cowes from 11-14 October is sure to have something for everyone.

This festival, now in its 7th year, has a programme of over 60 speakers at Northwood House, Cowes.

Red Funnel, which is supporting the festival as title sponsor, is offering festival goers a number of travel offers. Festival goers taking the car over from Southampton to East Cowes can book in advance and save 20% off a return crossing. Foot passengers travelling on Red Funnel’s Hi-Speed Red Jet service can get to Cowes with an IW Literary festival passenger offer including a special £9.95 day return and a £15.95 weekend return.

High profile speakers this year include Terry Waite, Peter Snow, Bob Champion and John Suchet. There is something for book lovers of all ages and interests, with politics and political history featuring strongly in the programme – “People like us” Caroline Slockock – first female private secretary to Maggie Thatcher, Theo Barclays Fighters and Quitters – about great political resignations, Stanley Johnson’s novel “Kompromat” and the festival finishes with what promises to be a lively politics question panel with the Rt Hon Andrew Mitchell MP, Austin Mitchell, Bob Seely MP and Julian Critchley – chaired by Rt Hon.Sir Richard Ottaway.

Jonathan Green, marketing and communications director at Red Funnel, said: “From Tennyson to Minghella, the Island has rich literary connections and now the Red Funnel Isle of Wight Literary Festival is set to turn Cowes into a literature lover’s dream this October.”