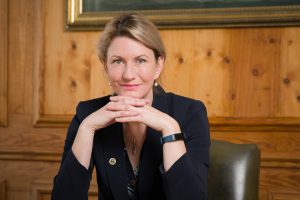 Girlguiding always likes to hear of girls and women who succeed in their chosen careers. Here is a point in case:

Awarded to recipients who are serving or have served in the Merchant Navy and fishing fleets of the UK, Isle of Man or Channel Islands for exemplary services and devotion to duty, it recognises those who have set an outstanding example to others and made contributions in the areas of maritime safety, training, efficiency, welfare, and saving lives at sea.

This year’s medals will be awarded to a total of 19 mariners across a range of categories.

The award coincides with Merchant Navy Day, a day that celebrates the vital role of Merchant Navy seafarers and the contribution they continue to make to the country, as well as their wartime service.

Fran Collins started her career as a dual cadet and sailed on deep-sea oil and gas tankers before going on to become the first female captain for Channel Islands operator, Condor Ferries. She moved ashore in 2008 and was subsequently promoted to Executive Director – Operations where she was responsible for ensuring service delivery to Channel Island communities, prior to commencing her current role as CEO of Red Funnel in June 2018.

Upon receiving news of the special award, Fran commented: “It is a great honour to receive the news about the Merchant Navy Medal award, and on a day that celebrates the collective contribution that men and women have made, and continue to make, in British seafaring. I am particularly passionate about supporting and encouraging new generations into the maritime sector and to raise awareness of something that is so much a part of our nation’s heritage.”

Fran is committed to increasing diversity in shipping and making a sea-going career more attractive and accessible to all. When she first went to sea in 1993, approximately three per cent of the world’s shipping workforce was female. 25 years later, the figure has barely changed and the overall number of entrants into the industry has declined, despite improvements in legislation and working conditions.

Fran continued: “I’m keen to encourage more people, especially women, into the industry. There hasn’t been much progression in the perception of the Merchant Navy as a career choice since I started which is disappointing given the fantastic opportunities available. At Red Funnel, we sponsor people into the industry across all levels of engineering, navigation and hospitality to help counter the decline in numbers of seafarers in the UK, and to ensure that more people are aware of what the Merchant Navy can offer in terms of a career – especially given that most imports into the UK are made through sea-shipping. I’ve been privileged to enjoy an incredibly rewarding career, both ashore and afloat, and am grateful to have amassed a wide variety of skills and experiences that could only come from being in this exciting and ever-changing sector – one that I hope I can encourage more young people to be a part of.”

Fran Collins will officially be awarded the medal at a ceremony at Trinity House in November.