Rainbows, the youngest members of Girlguiding IW, their leaders and some family friends of the girls from The Needles Section have enjoyed a trip to Adventure Wonderland near Bournemouth.

Karen Newman (Yarmouth leader) said “The venue is perfect for the Rainbow age group (5-7) and the Rainbows had a fantastic day.”

After travelling by coach and ferry all those attending had a whole day of fun. As well as enjoying going on all the rides and attractions including Swingboat, Giant Slide, Carousel and Assault Course they met the Wonderland characters. Whilst meeting Alice, The Mad Hatter and White Rabbit all the children had their photo taken. 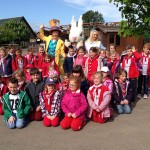 Picnic lunches were tucked into followed by ice creams-the best way to end a great day out which was planned by Carol Firth, Needles Section Commissioner.

Needles Section covers half of the Island’s Rainbow units with the rest of the Island belonging to the Puckpool Section where members also often enjoy outings and day-trips .