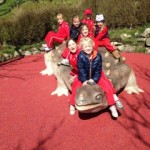 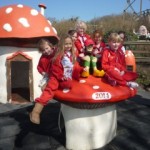 Dozens of Rainbows from the Puckpool Section of Girlguiding IW headed to Blackgang Chine recently to take part in an Easter Egg hunt for an Easter Challenge.
Together with their leaders the girls worked in groups on clues which had been set by Section Commissioner Ann-Marie Kitcher.
In finding the clues all the girls and leaders had the chance to explore Blackgang Chine including the new ‘Restricted Area 5’ home to the dinosaurs. Seeing and hearing a really large moving dinosaur at close quarters was a shock for some but a treat for others.
Moving on from the dinosaurs all the girls hunted for the clues in the more traditional areas as Nursery Land, the Hedge Maze, Crooked House, Rumpus Mansion , Fairy Land and Snakes and Ladders as all had clues for the finding. As well as clue hunting some of the Rainbows ventured onto the rides.
Emily Hoban (6) from 2nd Ryde Rainbows said, ”Rumpus Mansion was really scary, snakes and ladders fun and I really enjoyed seeing all the fairies.”
Following all the hard discoveries of the morning a well deserved picnic lunch was enjoyed alongside the Pirate Ship and it was not long before most of the Rainbows were clambering on board this Pirate vessel.
This special adventure for the Rainbows concluded with the presentation of Easter Eggs.