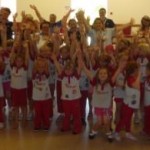 Rainbows, the youngest members of Girlguiding, have recently been dancing for three hours in aid of charity as well as having fun and making new friends.

All the Rainbows and their Guiders from the Island’s Needles Section decided to support ‘Mary’s Meals’ as this charity supports children. Recently the Mary’s Meals charity revealed it now provides one million children in some of the world’s poorest countries with a meal on every day if they attend school.
This Scottish registered charity based in Argyll, which began in Malawi in 2002 by feeding 200 children a day, now works in 12 countries across four continents where community-run school feeding programmes have been set up. These programmes encourage children who may otherwise be forced to work or beg to go to school. 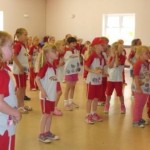 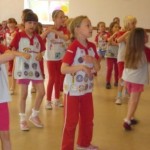 Taking place at Wootton Community Centre the dance sessions attracted over fifty dancers and sessions were led by Angie Wood from Island Combat & Fitness Centre and Guiders Sheila Cates and Di England whilst Guider Kay Burnley-Smith led a singing session at the end of the afternoon.

Organised by one of the Needles Section Guiders, Nicola Bell, the charity attracted a lot of support and two Rainbows, Lilly Chapman from Carisbrooke and Ellie May from Wootton raised a total of over £200 each, a great achievement when you are aged 5 and 6 respectively. When all monies are counted there will certainly be a large sum for the ‘Mary’s Meals’. 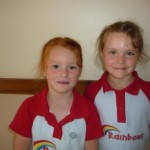 Carol Firth, Needles Section Commissioner said.” It’s great for all the Rainbows in the Section to get together. It gives them the chance to meet girls from other areas of the Island so they can understand that Rainbows are everywhere and not just in their own unit. This sum raised for the charity is very good and as well as dancing the Rainbows listened to a short talk on how life is like in other countries especially where the food supply is not all that it should be.”