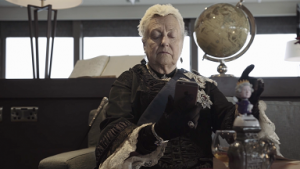 With huge interest in Queen Victoria following the release of the new film starring Judi Dench and Ali Fazal, and the return of ‘Victoria’ to ITV, Red Funnel has produced a fun and engaging video to persuade busy Londoners to escape the city and head to the the Isle of Wight.

Working with partners South Western Railway and English Heritage, the short, tongue-in-cheek video features Queen Victoria set in the present day, escaping the monotony of life in London. It starts at London Waterloo with Victoria, or ‘Nan’ as she becomes known, talking via text message with her granddaughter. Victoria travels solo by train from Waterloo with South Western Railway and makes her way to Southampton Central before boarding a bus to the ferry terminal.

In the video, Victoria cruises in opulent style across the Solent and is met on arrival in East Cowes by her horse-drawn carriage for the short ride up the hill to her beloved Osborne, the royal palace by the sea, designed by Prince Albert.

This video has been released online to coincide with the launch of the new Victoria’s Island trail which highlights thirteen locations and attractions across the Isle of Wight which have a connection with Queen Victoria and her family. They include the newly reopened Farringford, the former home of Lord Tennyson; St Mildred’s Church; Carisbrooke Castle; Shanklin Chine and the unique Ventnor Botanic Gardens. The trail allows visitors to literally follow in the footsteps of the former Queen – to walk along the same paths, to see the same views and to enjoy a unique journey around the Island.

Jonathan Green, Marketing & Communications Director at Red Funnel, said: “Londoners can reach the Isle of Wight, travelling via Southampton, in under two hours by train and ferry so we wanted to show how easy and stress-free the journey is and at the same time capitalise on the huge interest in Queen Victoria and royal life at Osborne. With a First Class service available from South Western Railway coupled with our new Signature Lounge experience on board Red Falcon and Red Osprey, it makes for a truly relaxing, lavish way to travel.”

Phil Dominey, Stakeholder Manager at South Western Railway, said: “People in London will find it’s really quick and straightforward to get to the Isle of Wight to explore Victoria’s Island and visit her royal retreat at Osborne by using South Western Railway trains. Whether going for the day or a weekend, through rail fares via Southampton are available which include the Quayconnect bus transfer and the ferry to either East Cowes or Cowes.”

Bryn Jones, Marketing Manager for Osborne House commented: “We were delighted to play our part in this rather cheeky little film. As Queen Victoria’s seaside residence on the island, it’s only natural she would want to head here for her short break! With the feature film launched on 15th September, and Victoria appearing on our TV screens at the moment, there’s never been as much interest in the iconic queen. We were really pleased to have the film shot on location at Osborne, where much of the historical events actually took place.”