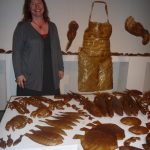 Winner of the ‘Quay Arts Open 2015’ competition, Joanna Kori, who lives in Ventnor, has been rewarded with her own solo exhibition.

Entitled, ‘Future Re Collections’ this exhibition will be on show in the West Gallery of Quay Arts from 10am-5pm until 1st April and  features six separate facets of the previous and current uses of this building on Newport Quay.

Joanna has made a great number of items, employing her trademark technique of constructing artefacts from gum strip paper and linseed oil.

She confidently informed us there were 1199 items on show, although she had not counted them herself.

With inanimate items like vessels and tools she wraps the paper around them, slowly building up a shape. When asked about the pigeons on display on the beams of the gallery ceiling she insisted there was no way she could have used live subjects. Her answer was to purchase dummy model birds in various modes. 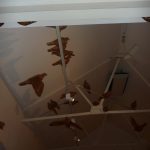 As the building was a Porter Store at one time it is appropriate that glasses, bottles and barrels form part of this unusual work. Historically casks of spirits were brought into Newport Quay by boat so casks are in this collection. 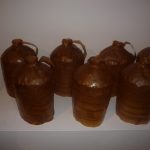 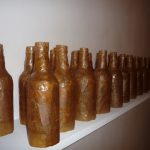 Joanna’s own favourite of the various scenes is ‘Raining Tools’ based on Leonardo da Vinci’s drawing of 1510 entitled ‘A Cloudburst of Material Possessions’. Evidently the building’s use by both artists and artisans spawned the idea of contemporary tools raining down. 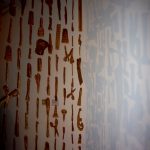 ‘Friends of the Sea’ is a reflection of the fishing industry on the Island, with a shoal of fish echoing past Island fish markets.

Six ropes suspended from the ceiling represent the fact that nine of the fifteen IW churches with operating belfries on the Island have six bells and ropes.

Currently, the Rope Store within the Quay Arts building and where ropes were made, is now used by the Quakers.(Society of Friends)

‘Remains of the Feast’ is based on the 2nd Century Roman mosaic ‘The Unswept Floor’ by Herakleitos.

It includes the cockerel headed man from the mosaic at Brading Roman Villa. Themed around casts of garlic, salad, crab, chips and ice cream cones it provokes us to consider the excess of food that we discard, daily.

Additionally, drawings by Joanna Kori may be found on the walls of the Quay Arts cafe until 17th March. 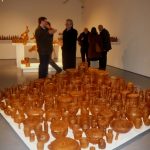