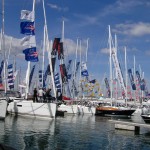 Isle of Wight based charity The Ellen MacArthur Cancer Trust is to be presented with a cheque for the charity on one of the exhibitor’s stands at this year’s PSP Southampton Boat Show.  On the first day of the show Ocean Safety have arranged a cheque presentation on their stand G125 where a representative from the EMCT will be on hand to receive it.

As well as sponsoring the Southampton Boat Show PSP Logistics, which has an office in Cowes, has sponsored one of the boats in the recent Clipper Round the World Yacht Race. Now a rare opportunity to experience life below deck on Team PSP Logistics, the 70-foot yacht that’s just circumnavigated the planet awaits you at this year’s Boat Show.

There will be the chance to get on board the Clipper Race yacht and find out what it takes to compete in the only race that allows amateur sailors to circumnavigate the globe. Team PSP Logistics and Clipper Race crew fresh from racing round the world will be at the Show.

The Clipper Race is the world’s longest ocean race, covering more than 40,000nM and stopping at 16 international ports across five continents and oceans.  Organisers Clipper Ventures, supply the fleet of twelve identical, 70-foot, stripped down racing yachts – each sponsored by a brand and led by a fully-qualified skipper, responsible for leading the crews safely around the globe. There is a unique pre-race training programme which ensures all crew are ocean racing ready. Anyone, even if they have never stepped on a boat before, can join the adventure and race one, several or all of the eight legs in this eleven month-long ocean race.

Clipper Race’s Crew Recruitment and Development Director, David Cusworth will be at the show looking for those eager to find out what it takes and how they can take part in the 2015-2016 race. There will be free crew presentations on Thursday, 18 September at 4pm – 5pm and on Saturday, 20 September at 12noon -1pm at the PSP Worldwide Logistics stand EO39A.

Following the untimely death of Andrew Simpson, whilst training for the America’s Cup last year, the Andrew (Bart) Simpson Foundation was set up in his name. Now the foundation is undertaking a Guinness World Record attempt. At the PSP Southampton Boat Show you are  invited to join in and take part in this attempt ‘Bart’s Bash’ by taking part in the Battle of the Classes Pursuit Race. In association with Yachts and Yachting and Active Nationthe winner of the event will win an RS Tera.

Following the Pursuit Race format, the first race will start at 1pm on 21st September. Competitors will launch from the nearby Southampton Water Activities Centre and will be competing on a course laid just off the boat show marina. Each class will be represented by just two boats so standards will be high with each class competing to show who is best.

After racing, hear the results on the Active Nation stand A132 where the prize giving of an RS Tera will take place.

During the 10 days of the Show, Active Nation will be persuading the nation to be active via a variety of outdoor skills, all of which will be taking place in the all new Show Climbing Centre based at the Active Nation stand in the Arena. All equipment will be provided, all you need to do is turn up

Battle your way up the bouldering wall, race through the assault course or face your fears on the fan descender. Active Nation manages 17 sports and exercise venues across the UK, working with 6 local authority partners to deliver a variety of innovative sports and exercise programmes for all ages and abilities. The Southampton contract has the most diverse range of sports to covering sailing and powerboating, racquet sports, snowsports, paddlesports, swimming lessons, gym sessions, exercise classes and much more.

Someone who is very active is up and coming sailor Lizzy Foreman.  Hudson Wight which  has Cowes as a base and supply Performance Sailwear is the Title Sponsor for Lizzy,  the UK’s Mini Transat sailor who will compete in this infamous solo race in 2015. Mini Transat 6.50 also known as Transat 650 is the solo transatlantic race that starts in France and ends in Guadeloupe covering over 4,000 miles with a stop in Lanzarote, Canary Island. Yachts in this race are very small (Lizzy’s boat is 21 foot long) considering the scope of the race which takes place in odd-numbered years. Sailors have to qualify by covering one of two specified 1,000 mile courses along with having 1,000 miles of ocean racing experience, much of it solo. For a chance to meet Lizzy and talk about her sailing exploits visit the Hudson Wight stand BO12.

Of the various attractions on show this year we have selected some of the more unusual or those new to the show.

Tall Ship Phoenix is  a magnificent replica two masted brig and is something of a movie star having played roles in countless shows and films including: Alice In Wonderland, Clash of the Titans, Cloud Atlas,  Count Of Monte Cristo &  Dr. Who. Berthed on the Marina it will be easily spotted being 112 ft long and 45ft wide. Layed out across three decks this fantastic ship could be straight out of the times of Blackbeard and his pirates.

In complete contrast there is the chance to experience what it is like to be on board a Royal Navy Patrol Ship. Go aboard the ‘Lucky Severn’ anchored near the Show on Thursday 18th September between 1 and 4pm.

HMS Severn is the second River-class built by Vosper Thornycroft at their Woolston yard. She is one of the trio of Offshore Patrol Vessels ploughing the seas around the UK almost every day of the year. This patrol ship can be used for anything from fire-fighting to disaster relief operations.

The 79-metre River Class Offshore Patrol Vessel, HMS Severn, will make a star appearance at the Show. The Vessel, which weighs a powerful 1,677 tonnes and is deployed primarily to undertake the vital job of fisheries protection will be opening her gang plank to visitors.

HMS Severn is one of three River Class Offshore Patrol Vessels which make up the majority of the Royal Navy Fishery Protection Squadron alongside sister ships, HMS Tyne and HMS Mersey. HMS Severn is based at HM Naval Base Portsmouth and along with her sister ships, entered service in 2003, replacing the Island Class Patrol Vessels. This current HMS Severn is the ninth Royal Naval vessel to bear this name – her direct predecessor was a Vickers built submarine launched in 1934 with wartime service in the South Atlantic before transferring in 1940 for the Norwegian Campaign during which she sank the SS Monark, before deploying to Nova Scotia as convoy escort. The ‘boat’ was called the ‘Lucky Severn’ and the current Severn’s company hope to inherit their great fortune.

After the success of the Vue Big Wheel being at Cowes for AAM Cowes Week the wheel will now be at Southampton for the PSP Boat Show.  You will feel on top of the world  if you venture onto the wheel to let this graceful giant gently lift you over 100 feet into the air in a  capsule which gives a spectacular 360 degree panoramic view of the Show and  Marina.

Fifteen members from the Wooden Boatbuilders’ Trade Association (WBTA) are at this year’s Show. Their display will cover all types of craft and most methods of construction and provide the backdrop at the entrance to the Show on the left of the main entrance Stand A100.

They will also show how to make a simple lap joint and let members of the public have a go at making this. Talks are being arranged to cover the ‘wonder material’ that is wood and to show how modern products have transformed the use of wood for boats and yachts.

With a  wide variety of builders present, from all parts of the UK, they will be able to answer questions on different forms of construction, and show the craftsmanship and knowledge that is inherent in a successful boat project.

This year’s show commences on Friday 12th September which is preview day and runs until Sunday 21st September.