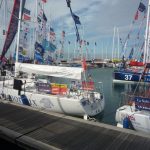 Having barely had time to recover from one of the hardest opening stages in the long history of La Solitaire Bompard Le Figaro, the 39 skippers in this four-stage solo grand prix are now preparing to leave Cowes on stage two.

Whilst in Cowes all the sailors were able to sample the delights of the town and a number commented on how they had been made welcome after experiencing the tricky waters between the Needles and Cowes as well as the challenging conditions on the course.

At the prizegiving, which took place on a special stage, all 39 skippers were introduced to the supporters who as well as watching the awards being presented were enjoying the Event Village in Cowes Yacht Haven.

A number of stands surrounded the stage including one showing Chatham shoes. Chatham usually has a stand on Cowes Parade during Cowes Week and was pleased to support La Solitaire Bompard Le Figaro. During this event Chatham were joined on their stand by representatives of Kilchoman Whisky which ran a competition for the chance to win a bottle of this single malt whisky from Islay. 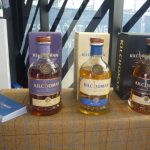 Established in 2005 the Kilchoman Distillery, one of the smallest in Scotland, has an Isle of Wight connection as the wife of the owner Anthony Wills lived in Cowes for a number of years in the 1970s/80s.  Anthony runs the distillery with his three sons, Peter, George and James who remember, when children, visits to their grandparents in Cowes.

One of a handful of small distilleries in Scotland they practice floor malting with this process following the growing of the barley on the farm, the only distillery in Scotland to do this.

Other stands included one with local artist Rowena Wright who was busy painting this year’s La Solitaire Bompard Le Figaro logo onto one of the Tapnell Farm cows. Later all the race competitors signed their names over the body of the cow making another unique display for Tapnell. 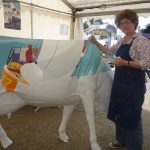 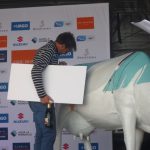 At the prizegiving there were special awards for the 1st lady sailor to cross the line, the 1st Rookie sailor and special prizes from a French Radio Station as well as gifts of cashmere clothing from the title sponsor Eric Bompard and the cash prizes. 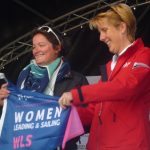 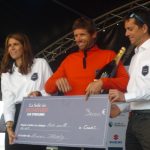 In a welcome to Cowes speech Mark McNeil from Destination Cowes said that it was only right that as Cowes was twinned with Deauville, the race start, the first leg of the race should finish in Cowes. Also on stage was the Mayor of Paimpol the next stopover for the race who joked that sunglasses would definitely be needed in Paimpol.

Back to the race itself-The first leg was dominated by tricky tidal gates along the English south coast that – combined with fickle wind conditions – caused huge splits in the fleet. The second 435-nautical mile leg to Paimpol is likely to be a case of more of the same.