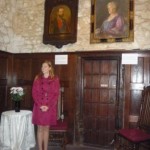 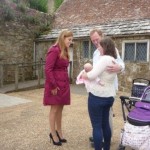 HRH started her visit at Carisbrooke Castle after being met at Cowes by HM Lord-Lieutenant Major General Martin White CB CBE JP.  He commented prior to the visit: “I am delighted that HRH is visiting the Island. Her forebear’s links with our community are numerous and we are very much looking forward to, not only sharing some of those important historical connections, but also introducing today’s Isle of Wight and its people.”

At Carisbrooke Castle the princess was presented to Mrs. Fiona White, Mrs .Claire Locke, High Sheriff of the Isle of Wight and Councillor Ian Ward, Chairman of the Isle of Wight Council by Martin White who then presented Mrs. Judi Griffin MBE DL – Chairman Carisbrooke Castle Museum Trust, who acted as host at the Castle Museum.

Just inside the museum there are paintings of the late princess and her husband Prince Henry of Battenburg and Princess Beatrice was only too pleased to be photographed by these two paintings. Judi Griffin presented HRH to Johanna Jones, local historian and one time resident of the Castle.

After a tour of the museum the princess agreed to sign the visitors’ book and was presented with some Princess Beatrice Cakes by Judi Griffin.

A short walk across the Castle’s courtyard brought the princess to the Princess Beatrice Garden where she was introduced to Mr. Stephen Alexander, Manager Carisbrooke Castle, Mr. Toby Beasley, Head Gardener and Miss Charlotte Lock, Gardner.

Touring the garden was obviously a pleasure for the princess as she stopped to admire the various flowers and plants and children from a visiting school party called to her from the Castle’s battlements.

One of the Castle’s donkeys was on hand as Princess Beatrice left the garden to make her way to the First World War memorial which is housed in the chapel.

Following the chapel visit the vicar of Carisbrooke, who also has the Castle’s chapel within his Parish was outside with his wife and small baby. Princess Beatrice stopped to speak with the Rev. Marcus Bagg, wife Emily and baby Lydia as well as other onlookers.

Several small children were thrilled to wave to a ‘real’ princess as she left the Castle for her next visits to Whippingham Church and Priory School, Whippingham as well as Osborne House.