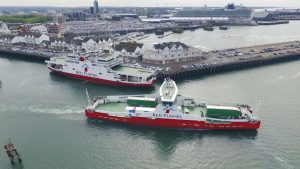 Red Funnel Ferries is pleased to announce that it has been shortlisted for Maritime UK’s Maritime 2050 Award, in recognition of its work in supporting British shipbuilding.
A proud British brand with a long maritime history, Red Funnel’s roots date back to 1861. Since then, Red Funnel has always taken pride in doing its part to keep Britain on the map as a global maritime leader.

Most recently, Red Funnel awarded a £10 million contract to Cammell Laird, based in Birkenhead on the River Mersey, to build its new state-of-the-art freight-only ferry, Red Kestrel. This marked the third successive UK-based ship order for Red Funnel, following the build of its newest high-speed catamarans, Red Jet 6 and Red Jet 7, both of which were built on the Isle of Wight at Wight Shipyard in 2016 and 2018, investing £13M into the UK economy, much of that staying right on the Island. Some 85 skilled Island craftsmen were employed during the Red Jet builds, including several apprentices.

Fran Collins, CEO of Red Funnel said: “We’re extremely proud to work within the British maritime industry and as a business, we work hard to help it grow. Our last three ship builds have been evidence of that.
Supporting the UK economy is embedded in the ethos of Red Funnel. During the Red Kestrel build alone, we supported 45 supply chain businesses and generated over 3,000 hours of apprentice work, so it is wonderful news that our efforts towards the Maritime 2050 strategy have been recognised by this nomination. We’re incredibly proud of this achievement.”

In addition to supporting UK shipbuilding, Red Funnel is also helping to keep maintenance jobs in the UK. In April 2019, the company signed a three-year agreement with A&P Falmouth to service its vehicle ferries for routine maintenance.