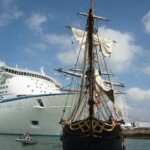 A tall ship took centre stage for the official opening of this year’s PSP Southampton Boat Show when it sailed into the Mayflower Park Marina.

‘Phoenix’ which is 112 feet long took the role of ‘Sophie’ in the TV series ‘Hornblower’. It is a replica two masted brig.

For the opening ceremony she conveyed TV personality Matt Baker, who was accompanied by Frank Dixie and Jo Dixie-Goodwin, from the title sponsors PSP Logistics. Also on board was Olympic medallist Iain Percy, a trustee of the Andrew Simpson Sailing Foundation. Iain and Andrew raced together in the Star Class Olympic yachting. They took gold in 2008 and silver in 2012. Iain also struck gold in the 2000 Olympics in the Finn Class.

As the ‘Phoenix’ docked a number of children who have learned to sail with the Andrew Simpson Sailing Foundation, the Official Charity of the Show, went on board to help cut the opening ribbon. 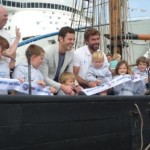 Escorting ‘Phoenix’ into dock was a competitor from the recently completed Clipper Round the World Race. ‘PSP Logistics’, skippered by Chris Hollis, was the subject of a gentleman’s bet with ‘Henri Lloyd’ another entry. It was the latter that took overall honours.

After seven years of sponsoring the Southampton Boat Show PSP have announced they are bowing out as the Official Sponsor. However, Frank Dixey said that after making this decision there was the chance of a change of plan so watch this space. PSP was the first ever Title Sponsor of the Show. Sea Changers is PSPs chosen charity this year. It aims to raise money for vital UK marine conservation projects.

Poole based Sunseeker International again had Formula One pundit Eddie Jordan on their stand. He teamed up with Claudia Winkleman to unveil new vessels with Claudia being surprised at the size of the new Sunseeker 86. Sealine launched their new Sports Cruiser the S330 while the F380 made its UK premiere. 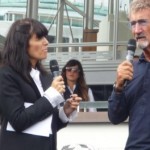 Anyone seeking a bird’s eye view of the Show could head for a trip on the Vue Wheel. From 100 feet above the ground the panoramic views from the wheel’s capsules were fascinating.  Over the city and across Southampton Water to the start of the New Forest including looking down on the cruise ship gave a whole new aspect to the show now in its 46th year. In June the Vue Wheel was at the Isle of Wight Festival and in August in Northwood Park for AAM Cowes Week. 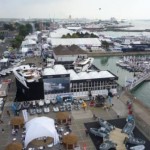 Ocean Safety organised one of the first events of the show when Charlie Mill from the company handed over a cheque for £500 to Clare Ross from The Ellen MacArthur Cancer Trust (EMCT).  To enable the money to be raised Ocean Safety advise sailors to drop off their life rafts, when they need to be checked out, to the EMCT base in East Cowes and the company donates an amount to the charity each time this happens. 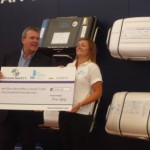 Also with safety in mind was Crewsaver. This company produce safety gear for sailors and recently designed the Ergofit 290 lifejacket with the sailing team from Abu Dhabi Racing. A gift box of safety gear was presented to Iain Percy marking 30 years of the Crewfit lifejacket .

Following the successful exhibition of his work at AAM Cowes Week, artist Stephen Lee was on hand at the Boat Show to demonstrate his painting skills. Working in vibrant colours the paintings are mainly of marine topics but his study of beach huts is a must for those who need reminding of happy days on the beach. 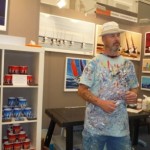