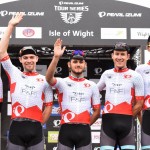 Major circuit cycle racing came to Ryde on Thursday evening. Following a day of support races, which included local riders, 45 competitors lined up on Ryde Esplanade.
Representing nine teams the riders tackled the steep climb of one of Ryde’s most well known streets, Union Street, before turning left into the recently re-surfaced Cross Street. They continued along Melville Street, before descending Dover Street and sweeping back onto the Esplanade’s Start/Finish Line.
This main event lasted 75 minutes and included three sprint laps. Five final laps to the Go Bell provided the climax to the evening, as the pace was racked up.
Two teams, Madison Genesis and One Pro Cycling, dominated the proceedings. New Zealander Tom Scully (MG) was the race winner, setting the fastest lap in the process. Team mate Tom Stewart was the points winner on the night and took the overall lead into Round 2 which will take place in Redditch.
Ten rounds make up the Pearl Izumi Tour Series and Ryde was the inaugural venue for the season. One Pro cycling were team of the night as well as being the leading team after this first round.
In the mid afternoon the teams (of five riders) came out, one team at a time and at 7 minute intervals, onto the course to contest the Team Time Trial. It was this event combined with the evening’s headline race, which determined the overall placings. Local team- Wightlink-LCM Systems were invited to take part in the Team Time Trial as a guest team.
Following the racing on Thursday the proceedings were shown on ITV4 the next day. This one hour programme not only covered the race but well known Island born international cyclist Keiron Page showed viewers some of the Island’s best landmarks whilst cycling around part of the Island. Now living in the South of France Keiron set a new Commonwealth record at the 2002 Commonwealth Games with 4:29:662 in the 4 km pursuit.
Results from the opening round of the 2015 Pearl Izumi Tour Series cycling were: ( Including the opening Team Time Trial.)