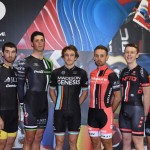 On Thursday, 14th May, the Island will host the first round of the Pearl Izumi Tour Series with the UK’s leading cyclists competing in a fast-paced road race around a 1.2km street circuit in Ryde.
Parts of Ryde will be transformed into a high-speed, professional circuit where top-class cyclists will battle it out at speeds of around 30mph and along parts of the Esplanade there will be the start/finish line as well as a ‘pits area’.
This race is expected to attract a host of top names with the brand new Team Wiggins, formed by 2012 Tour de France winner and Olympic champion Sir Bradley Wiggins and the One Pro Cycling team of England cricketer Matt Prior and Olympic Champion Ed Clancy billed to compete.
Back in January Visit Isle of Wight (VIOW), the Isle of Wight Council and Island Roads made the announcement that after months of negotiation, they had been successful in securing this prestigious sporting event to take place on the Island.
In addition to the Pearl Izumi Tour Series Races activities will be held from 12.30pm for local school children aged 10 and 11. This will be followed by an afternoon of support races for local cyclists, ahead of the professionals taking to the circuit for the Tour Series Team Time Trials.
Primary schools on the Isle of Wight have been invited to design a key piece of equipment that will be used to begin races with each school being asked to design the start flag. This flag must be based on the theme ‘why cycling is good’.
Starting at 7.30pm the exciting Tour Series Race takes place giving spectators a close-up view of the athletes as they race from the start/finish line on The Esplanade before the streets of Ryde are undertaken. Union Street and Dover Street will be excellent for the hills- no flat Champs Elysee and cobble stones here!
This Team Race, open to teams comprising four cyclists, is a highly popular and competitive event. Registered entrants have the chance to ‘test their mettle’ around the circuit and against the clock. The team with the fastest lap times will be presented with winners’ medals on the podium.
Taking place at 10 venues around the UK in May and June, the star-studded sporting event will use a circular route around the town on Thursday, 14th May. Hosting the first leg of the Pearl Izumi Tour Series, the Isle of Wight is expecting crowds of up to 10,000 to come out and enjoy the race.
David Thornton, CEO, Visit Isle of Wight, said: “We’re delighted to have the first leg of this elite race series, which should provide a boost to the local economy with lots of visitors coming to watch the race.
“Additionally, the TV exposure on ITV4 will help us to showcase Bicycle Island across the UK as a premium cycle holiday destination.”
Launched in 2009 the Pearl Izumi Tour Series is put together by the same team behind the organisation and promotion of the Tour of Britain. For those who can’t view the racing in Ryde other venues include, Aberystwyth, Durham, Canary Wharf (4th June) and Bath (11th June.)