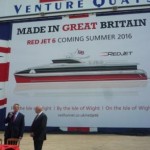 After a break of 15 years passenger shipbuilding is due to return to the Isle of Wight.

Red Funnel has confirmed that it is bringing fast ferry construction back to the UK with the announcement that its new passenger ferry Red Jet 6 will be built in East Cowes at Venture Quays.

After receiving tenders from shipyards around the world, Red Funnel has placed an order for a 40m high-speed catamaran with Shemara Refit LLP for delivery in summer 2016. Costing £6m, Red Jet 6 will be the first vessel of her kind to be built in the UK for 15 years.

Aluminium fast ferries have been designed and built on the Isle of Wight in the past. Three pioneering Solent class catamarans were built by FBM Marine in Cowes for Red Funnel in 1991, 1992 and 1998 and FBM’s customers included the Ministry of Defence. Vessels were also constructed for operators in Portugal, Greece and Asia and large 45m and 53m TriCat catamarans were built between 1995 and 1999 for service in Greece, Hong Kong and Macau. However, the shipyard closed in 2000, marking the end of building displacement fast ferries in the UK until now.

Isle of Wight based Shemara Refit won the order for Red Jet 6 by offering a competitively priced vessel which met Red Funnel’s design brief and desire to have the vessel built on the Isle of Wight. Confidence in Shemara Refit’s management capabilities and quality of workmanship stemmed from the impressive restoration of the famous motor yacht Shemara for Sir Charles Dunstone.

Peter Morton, MD of Shemara Refit said “The Red Jet 6 contract will create 40-50 new jobs at Venture Quays as well as securing other jobs in the supply chain. Wherever possible these jobs will go to Islanders who have the right skills. We very much look forward to the re-birth of high speed passenger shipbuilding by producing a technically advanced vessel which we believe will have the potential for further orders in the future. As a consequence we will be taking on a number of apprentices to provide the skills for the future.” Peter certainly knows about boats, not only the building of them but how to sail them as he is a well known keen local yachtsman who takes part in races in the waters off Cowes as well as other destinations.

Red Jet 6 will be Red Funnel’s largest and most innovative high-speed vessel yet, offering ground breaking levels of passenger comfort, reliability and safety. She will also be the greenest ship in Red Funnel’s fleet with a host of design features to reduce fuel consumption and protect the environment in line with the company’s ISO 1400:1 accreditation.

With an aluminium hull the new boat will be similar in design to Red Jet 4 but to improve efficiency Red Jet 6 will be slightly longer at 41.12m.  Passenger accommodation will be insulated from the hulls to reduce vibration and cabin noise. Like her sisters, Red Jet 6 will use waterjets rather than propellers to aid manoeuvrability and provide impressive stopping power whilst keeping wash to an absolute minimum.

In a break with tradition, she will be fitted with four main engines rather than two. Each MTU 2000 series diesel will power a separate MJP 500 waterjet unit. This configuration will help reduce fuel consumption by 11% vs.

Other technical innovations to help reduce fuel consumption include the use of vinyl instead of paint for the superstructure to reduce weight and the application of the latest Teflon hull coatings to minimise drag through the water.

Red Jet 6 will carry 275 passengers and provision has also been made to carry 22 bicycles.

Red Funnel is also inviting members of the public to submit their ideas and suggestions for interior features and the Red Jet 6 project will also be used to engage with local schools and colleges who have students interested in a career in engineering or manufacturing. Shemara Refit hope to install a viewing gallery at Venture Quays to enable members of the public to watch the build process and other ideas include visits from school groups on educational trips.

On hearing the news that this type of ship building is returning to the Island, Cowes businessman Geoff Banks said “Red Funnel have certainly ticked all the boxes here. This company has been serving the Island for over 150 years and to give an order for their new ferry to local craftsmen and to create new jobs is excellent for East Cowes, Cowes and the whole of the Island.”