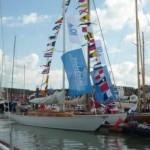 While experiencing a week of hot sunny weather both sailors and spectators could be forgiven for thinking they were actually in the Med where other Panerai events are held.

With such a large fleet in Cowes racing took place over several classes. To find the overall winner in each class each boat counted its six best results. Therefore their worst showing was discarded.

Racing was close in Class 1 with Soufriere (Stephen O’Flaherty) pipping Sean McMillan on Flight of Ufford by dint of four wins.

In Class 3 Christine & Giovanni Belgrano aboard Whooper chalked up seven straight wins. Their one off sloop was built by Woodnutts in St. Helens in 1939. Andy King’s Gluckauf proved second best in the class, recording 4 runners-up slots and five thirds.

Saskia ((Murdoch McKillop)won the 8 metre division despite failing  to win a single race-he amassed 6 seconds and a third. Despite taking four victories Christopher Courage’s Helen scored a trio of 5th places which damaged her points tally.

Monday brought an intriguing Round The Island Race. From the start the fleet was left becalmed. Later the wind picked up considerably but only 18 finished the race and several boats ‘Did Not Start’. Line honours went to Flight of Ufford and overall victory to the Class 4 entrant Nausicaa (David Messum).

Overall honours in the Panerai British Classic Week went to the all conquering Whooper which also won Wednesday’s Ladies Race, which was not part of the points series. Mikado was second overall with  Cereste third.

Red Herring, based in Hampshire, were caterers during the week. As far as possible they source their supplies locally. One product was ‘Heirloom’ tomato from Island Salads which they try to use at all their events across the UK.  It is very small and sweet and was served with a sprinkling of black onion seeds. It is good to see Island produce being used at international events.