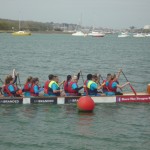 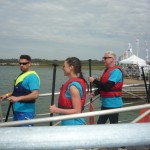 Celebrity attendees included Keith Duffy and Shane Lynch from Boyzone, Caroline Corr an honorary MBE holder and James Walsh (Starsailor) who is a regular solo performer at the I W Festival at Seaclose. Keith and Shane are long term friends and when Boyzone ceased recording they carried on as a duo. 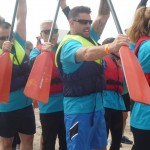 At the Dragon Boat event each team paddled two rounds with their fastest times deciding the line up for the grand final, in the late afternoon.

Competitors and their guests were given the opportunity to sample Isle of Wight Gin during the event. Mermaid Gin which is crafted by Xavier Baker at his specialist still sited within the Rosemary Vineyard complex was well received.

Island teams competing at Island Harbour included Cheap Skips (IW), Connor Construction, Island Harbour Marina, The Price is Wight Fibre and We Love Island Businesses. Some teams dressed to a theme with the ‘Ant Hill Mob’ getting a special mention from John Giddings. 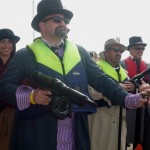 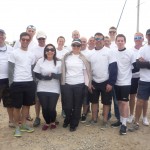 Cheap Skips (IW) recorded 1:11:46 to miss the final line up by the closest of margins.

With the tide swiftly receding the final race proved heavy going, for the quartet of contenders.

Reigning champions IW Festival, boasting Keith Duffy, Shane Lynch and Caroline Corr plus John and Caroline Giddings amongst the crew were hopeful of retaining their title.

Wightlink had other ideas, however, and the formbook backed up their confidence of success. Indeed, the ferry company had victory in their sight, only to be pipped by the reigning champions, who produced a late surging burst of determination. Their winning time of 1:56:25 demonstrated how conditions had deteriorated and the win was by a ‘Dragon’s Tongue.’

It was a very close finish with all four teams within 5.5 seconds overall. Island Harbour Marina overcame the challenge of Connor Construction for Island bragging rights. 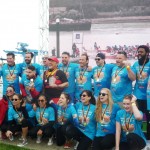