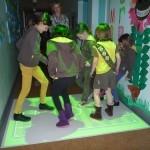 Brownies from the Northwood unit have made a visit to St. Mary’s Hospital (Children’s Ward) to see a new play area which they helped to purchase.
Along with other members of the public and trustees and members of the Friends of St. Mary’s who had contributed to a fund to buy a very special piece of play equipment the Brownies enjoyed a party which was organised by Play Organiser Dionne Davies.
£8,000 was needed to obtain the equipment –a magic floor- which will enable children who are undergoing a hospital stay to have fun whilst in the Children’s Ward.
This magic floor comprises a computer generated graphic which is activated by movement. There are several rolling programs including a football pitch, a lily pond with goldfish and poppy field. Children have to act quickly to interact with the graphic on the floor.
All the Brownies enjoyed jumping on the magic floor and the party also included food and drinks, decorating plaster shapes of flowers, teddy bears and butterflies as well as party hats for everyone.
Northwood Brownies had held a Bring and Buy sale to raise the money for their contribution- £100- whilst the Friends of St. Mary’s had contributed £4,000.