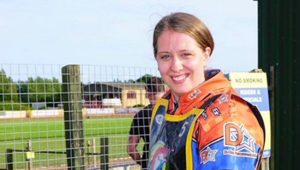 Lake Guides welcomed Steph Whitlock from the Wightlink Wizards development team to one of our last meetings of the Summer term. Steph and her father Colin talked to the Guides about how Steph got into Speedway, sharing stories of her first skid as well as allowing the Guides to try on race boots and race suit.

The Guides were lucky enough also to sit on Steph’s bike, which has NO BRAKES!, and feel how powerful and incredibly loud it is. Isle of Wight Speedway invited the girls and their families to go along to a race night to experience the thrill of racing at first hand and the Guides thoroughly enjoyed the evening.  It was a pleasure to welcome Steph, who is also one of the first female riders in the country signed to a Speedway team, to our meeting.

Meanwhile Lake Rangers welcomed the Island Commissioners  to their meeting who were proud to present three awards to Lake Rangersat the end of last term.

The three Rangers,; Phoebe Everett, Trinity Merryweather and Grace Vincent all completed the Chief Guides Challenge Award. This award is the second highest award available to young members and involves Rangers completing a series of tasks and activities from the eight areas of the former Ranger programme.

Some of the tasks undertaken by the three girls included taking part in the NCS programme, completing first aid qualifications and taking part in International selection events.

They have also, through Rangers, looked at important issues for girls today such as their role in society and issues faced by many youngsters as well as completing activities from the Barclays life -skills programme.

Their awards were presented during an evening where Rangers were taking part in the government  “Equaliteas” activities; looking at gender stereotypes and equality for all.