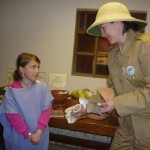 Back in 1926 when the owner of a nearby house sank foundations for a garage those doing the digging found the first evidence of Newport Roman Villa. Subsequent excavations revealed extensive remains of a late Romano-British farmhouse built around 280 AD.

To celebrate the 90 years since its discovery on the 24th of March 1926 free entry  was offered to visitors on 1st April2016- and no it was not an April Fools prank there was really free entry and for those attending Birthday Cakes!

For the Open Day there were displays telling the story of the discovery of the Villa and activities for families included making a birthday badge, having a go at the photo hunt, dressing in Roman clothes and helping to find the missing tools for the Villa’s archaeologist. Estelle Baker, a member of the Isle of Wight Heritage Service dressed in clothes depicting typical wear for the archaeologist of the day in 1926.

The Villa reopened for the new season on 25 March 2016and will remain open throughout the summer, however, the Villa can be open by prior arrangement to groups and school parties in the winter period.

All the well-preserved remains at Newport Roman Villa provide a fascinating insight into country life in third century Britain with the Villa having a superb bath suite with, under floor heating and remnants of mosaic floors.

Sections of the Villa have been reconstructed to illustrate the building materials used and you can peep into a Roman kitchen and see a slave preparing a Roman feast.

At the villa there is a hands-on activity room where you can make a mosaic, repair a broken pot or weave a blanket or you can discover the plants Romans would have used in the beautiful herb garden.