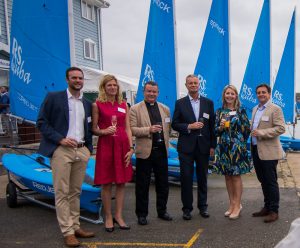 Solent-based businesses have supported UKSA’s youth development programmes with the sponsorship of five new RS Quba dinghies. These dinghies have been sponsored by Spinlock, Wightfibre, Red Funnel and Barton Estate and were named by UKSA Ambassador Helena Lucas MBE and  blessed by the Reverend Andrew Poppe.

All the dinghies will be used by children and young people getting out on the water at UKSA. Many of them will be taking part in UKSA’s Test the Water programme or the National Citizen Service (NCS) programme, delivered at UKSA, and for some it will be their first time out on the water.

Spinlock’s Operations Director Caroline Senior said: “We are proud to have worked closely with UKSA for the last 15 years and it’s great to see the children come away from their time there filled with water confidence. It is amazing to think that thousands of local children will sail on boats we have provided and we look forward to seeing the distinctive blue hulls and sails coming up the river Medina past our head office.”

A third dinghy, sponsored by Wightfibre, was purchased thanks to the monies raised at the Wightfibre Star Wars Charity Premiere, held in 2015. Wightfibre chose to ask the public to name the dinghy, with the winning name ‘Princess Leia’ announced at the special event. Wightfibre’s CEO John Irvine said: “As a local, Isle of Wight based company, WightFibre tries to give back to our community where we can. UKSA is an important charity which helps many young people on the Island, as well as further afield, and because of this WightFibre has supported UKSA over many years. We are delighted to further this with our dinghy sponsorship.”

Barton Estate’s dinghy was named Lotte and Red Funnel’s was named Red Robin. Kevin George, Red Funnel’s CEO commented: “We are delighted to continue our support of UKSA’s work with young people which follows our sponsorship of the Year 6 programme in 2015. This programme saw every Year 6 child on the Island offered the chance of getting out on the water with the Cowes based charity.”

On naming the five dinghies, Helena Lucas MBE said: “It’s fantastic seeing UKSA getting so many young people out on the water, not just from the Isle of Wight, but from all over the country. It’s quite remarkable what they have managed to achieve.”

UKSA CEO Ben Willows added: “I look forward to seeing the new dinghies in use and, on behalf of UKSA, I would like to extend a huge thank you to the local businesses for their continued support of our charitable work.”