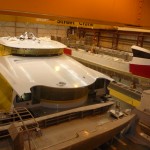 One year on from when Red Funnel placed an order with Shemana Refit LLP to build Red Jet 6 in East Cowes, she is due to be launched on the 4th of July.

A team of 58 permanent boat builders including five apprentices, have kept the construction of the new vessel on schedule. Their task has been to assemble the pre-fabricated components which arrive from Brisbane, Australia.

Fabrication manager Ian Woodford who is overseeing the project for Peter Morton who heads up Shemana said the two parts of the vessel were due to come together on the 30th April.

Then, inside the Columbine Yard workshop the superstructure will be craned onto the twin catamaran hulls and secured on rubber mountings, making a smoother ride for passengers.

Eight men who were involved with creating Red Jet 3 are working on the current incarnation of the fast ferry. 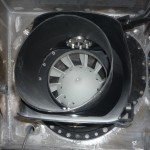 On the control deck the vessel will be manned by the skipper and a helmsman. Overall, the vessel is 1.5 metres longer than Red Jet 4. Unfortunately, the proposed bicycle racks have had to make way for extra buoyancy tanks for safety reasons, but following requests from passengers there will be a toilet on board.

Weighing in at 25tons, Red Jet 6’s progress has been recorded via time lapse cameras. She is due in the water on 26th May. From then, she will undergo her commissioning and five weeks of sea trials.

Peter Morton (pictured with Ian Woodford and Kevin George (Red Funnel CEO) was confident she will be completed on time and proudly revealed the luggage racks were made in Cowes.

If Red Jet 6 proves itself in service there is the strong possibility of another Shemana Refit catamaran following in eighteen months time. That vessel would e a replacement for the ageing Red Jet 3.

Looking to the future Red Funnel is keen to introduce a fourth car ferry into its fleet to ensure a more efficient and reliable service. 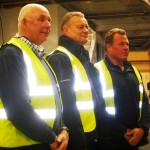