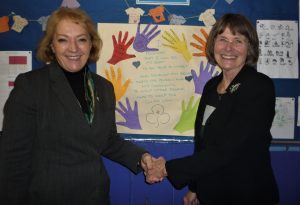 After some fifteen years Patricia Partridge has left the post as President of Girlguiding IW. Patricia has moved to the mainland and together with her husband John they will be nearer their family and be able to spend more happy moments with their grandchildren.

Although Patricia had moved to her new home, she returned to the Island recently and following the most recent meeting of Girlguiding IW’s Executive Committee a presentation of a hamper containing IW produce and an IW glass piece, was made by Shirley and Lesley.

Thanking everyone Patricia said that she had worked over the years with three very different styles of Island Commissioner’s leadership, but all had worked for the benefit of the girls on the Island. There had been several major changes within Girlguiding nationally, but the Island had encompassed the changes. In thanking all leaders, Executive Committee members and others associated with Girlguiding on the Island Patricia ended her short speech by saying that Girlguiding gave all its members a moral compass to follow.

Welcoming Girlguiding IW’s new President Gioia Minghella-Giddens Patricia and the Island Commissioners said that they hoped Gioia would enjoy her experience within Girlguiding. Having been a Brownie in Ryde it was felt that Gioia was the ideal choice for the post and Shirley Saunders presented Gioia with her President’s Badge.

Gioia said,“I am thrilled to follow Patricia, who will be a hard act to follow. I have always had a great admiration and respect for Girlguiding. I just want to get stuck in. I’m honoured to accept the role of President.”

As a last duty Patricia presented Lesley and Shirley with Island Awards which are presented to members who have undertaken extra service to Girlguiding on the Island.