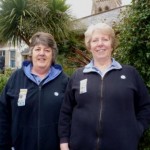 This appointment is made by the South West England Region Chief Commissioner Solange Rebours and Solange was pleased to appoint from the 1st March2015, and for a period of 5 years, Shirley Saunders.
Shirley lives in Sandown and is assistant leader of 5th Sandown Brownies. She will continue with this role as well as holding the post of Island Commissioner. Shirley is no stranger to Girlguiding having been Guiding for over 20 years. She moved to the Island 2 years ago to be closer to her mother, who had lived here for 30 years until she died recently. Since moving to the Isle of Wight Shirley has been Tawny Owl of 5th Sandown Brownies. Prior to her move to the Island her Guiding experience was in Milton Keynes where she was a Brownie Leader, Division Commissioner and Trustee.
Shirley said “I am very much looking forward to my new role as Island Commissioner and would like to thank all members who I have met so far for the warm welcome I have received. My vision is to build on the ambition of my predecessors, bring the island closer together and help Girlguiding on the Island continue to grow.”
In an introductory letter to leaders Shirley said “I would like to thank you all for the time and effort you all put into your units and Guiding on the Island in general and look forward to working with you all during my time in office.”
With well over 1,000 members Girlguiding IW is part of the largest female organisation in the UK and World. Over 600,000 members regularly attend meetings and events in the UK which is divided into Countries and Regions. The Island forms part of the South West England Region which includes the Channel Islands and Isles of Scilly as well as the mainland counties in this area of the UK totalling 16 counties in all.
Within SW England over 64,000 girls and young women are provided with a regular Guiding experience, made possible by the efforts of some 15,000 volunteers.
Following her appointment Shirley has appointed Lesley Clifford, also from Sandown, as Assistant Island Commissioner. Lesley will also hold this appointment for 5 years.
One of the first official engagements for Shirley and Lesley was to attend a reception hosted by Solange Rebours and her Region team. This evening reception was held at the Mary Rose Museum, Portsmouth and guests included heads of business, civic dignitaries form Hampshire as well as members of the wider community.