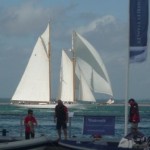 Cowes will see a number of premier sailing events in 2016 following on from this year which has seen the RYS Bicentenary celebrations and other prestigious regattas. For 2016 Cowes will be the focus for world class yachting events for the entire summer.

Included on the list of special events are the RORC Easter Regatta, JPMAM Round the Island Race at the beginning of July, Charles Stanley Cowes Classics Week which will be followed straight away by the Panerai Classics Regatta, Commodore’s Cup, Taittinger at the Royal Solent, International Etchells Invitational Regatta and the J111 World Championships both in the week prior to Cowes Week. Cowes Week itself, at the moment without a title sponsor, will be held 6th-13th August.The Royal London Yacht Club is then hosting the Etchells Europeans at the end of August and the Etchells World Championships in early September.

As well as hosting these regattas The Royal London Yacht Club, organisers of Charles Stanley Cowes Classics Week, in conjunction with title sponsor Charles Stanley, have decided to move this event in 2016 to two weeks earlier than previously scheduled, and it will now be held from Monday 11th to Friday 15th July, to avoid a clash with the Brewin Dolphin Commodores’ Cup.
Peter Taylor, Commodore of the Royal London Yacht Club and Principal Race Officer for the regatta, explained that the decision has been taken to try to avoid scheduling the event at the same time as any other major regatta hosted in Cowes, and to extend the gap between Classics Week and Cowes Week.
A number of factors were taken into consideration, before moving the date, and the organisers believe that the change will bring significant benefit to the future of the event for sponsors and competitors alike. When major regattas are planned for the same time there are a number of factors to consider including pressure on regatta resources, volunteers and social venues, pressure on moorings and accommodation and ferry travel.

Cowes as a premier sailing venue is expected to benefit from the decision as the new date will provide for a long season of major events in the town and an additional benefit for competitors is that the tides are extremely favourable in the new week, with a maximum 4.2m HW.