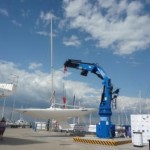 David Franks, Cowes Etchells Captain, commissioned the Shepards Wharf Marina’s new dry sailing crane  by swinging a bottle of bubbly at the crane’s base. He went on the say how this new state of the art piece of lifting gear will very much help those sailors who race ‘Dry’ boats and how fantastic it was to see the Etchells Class making a comeback in Cowes. After thanking Shepards Wharf staff and CHC for all their support he said, “ I am proud to be able to commission this crane during our inaugural Etchells Invitational Cup and I hope that this is the first of many new events for Cowes.”

David together with Andrew Turner MP were welcomed to the event by Cowes Harbour Commission (CHC ) Marina Manager Jock Rafferty. A number of the commissioners together with the Harbour Master Captain Stuart McIntosh and his deputy Rod Hodgson also attended the event.

Cowes Harbour Commission looks after Shepards Wharf and to keep Cowes in the forefront with regattas this new piece of equipment was much needed.  To show what Cowes can offer the sailor a regatta for the Etchells was hosted to coincide with the crane’s commissioning.

Competitors in the International Etchells Invitational Cup were amongst invited guests at the commissioning. Jock Rafferty, said: “It is a great honour for us to host the prestigious International Etchells Invitational Cup and to welcome you all to the home of dry sailing in Cowes to participate in the opening of our new marine crane. The crane you see here today is not only a fantastic new asset for Shepards but is also the catalyst for a whole new dry sailing era for the marina, cementing our place as leaders in this specialist area of the sport.” Etchells competitors, forming 20 teams, had travelled from around the World for the event which comprises 2-3 races per day all sailed in identical boats.

Shepards’ new hydraulic dry sailing crane, which cost some £150k,  is one of the largest of its type in the country, enabling Shepards Wharf Marina to lift any single point yacht, motor boat or rib, quickly and quietly and will future-proof the marina’s dry sailing operation against lifting requirements in the years to come.

Cowes Harbour Commission has provided subsidised moorings for the International Etchells Invitational Cup and is keen to demonstrate that more new significant events of this type could be attracted to come to Shepards Wharf Marina and Cowes as a whole in the future.