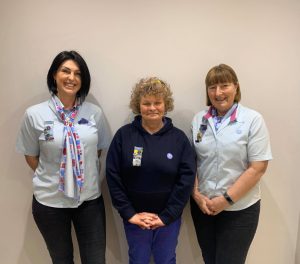 Following a five-year term by joint Island Commissioners- Shirley Saunders and Lesley Clifford- Girlguiding IW now has a team of three Commissioners to head up the Island’s leaders and support the 1,000 young members.

Linda Stone from Carisbrooke has been appointed Island Commissioner with Anne Watson and Donna Sanders as Assistant Commissioners. All three have been involved in Girlguiding over the years in fact they have a total of 80 years of volunteering between them.

Linda, who was a Queen’s Guide prior to becoming a leader works at IW College. She became a Young Leader with 16th Bromley Brownie Unit in 1970 before moving to 2nd Portsmouth (St. James) Brownie Unit in 1974. By June 1975 she had moved to the Island and was the Leader of 2nd Northwood Brownies where she remained until 1980.

Linda’s great love is of the outdoors and camping and she has organised the off- Island camping trips to international camps as well as camps on the Island. She has been the Leader of the IW contingent for the regular trips to Girlguiding’s ‘Big Gig’ the national pop-concert for Guides which sees 10,000 girls bopping along to the latest pop hits.

Anne and Donna have been Brownies, Guides and Young Leaders on the Island and have also been very involved with the trips to the ‘Big Gig’ as well as running Island units with Anne specialising with Brownies (ages 7-10) and Donna with Rainbows (ages 5-7).

After their appointments all three are looking forward to leading the Island members for the next five years. However, at this time of national crisis all Girlguiding meetings and activities have been halted but being the leading charity for girls and young women in the UK Girlguiding has introduced ‘AdventureAtHome’ on-line activities which are available to all via the national Girlguiding website. .