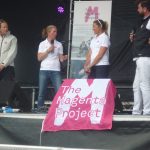 On the 1st of August Girlguiding launched the latest campaign to encourage girls into sport. After consultation with girls and young women numbers agreed that sport is not offered to girls as much as boys in Secondary schools in the UK.

At the same time a group of women who sail, launched their campaign to get more woman into sailing-one of a few sports where competitors both male and female can compete on equal terms.

A number of well known women sailors were in Cowes for the 2016 edition of Aberdeen Asset Management Cowes Week which gave them the opportunity to promote their campaign which is entitled The Magenta Project.

Supported by Round the World sailor Dee Caffari, Sam Davies and with Libby Greenhalgh 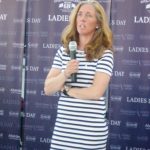 as operations manager they held a question and answer session on the main stage of Cowes Yacht Haven. Hosting the event was TVs Nick Knowles who visits Cowes Week on a regular basis.

All those taking part emphasised that sailing is ideal for women to take part in and that most areas of the UK have water nearby whether it is a lake or the sea. Asked by Nick as to how easy it is to find instruction the sailors replied that most areas have sailing clubs such as The Island Sailing Club on the Isle of Wight or there are sailing schools, such as UKSA based in Cowes which welcomes newcomers.

Later the same day members of The Magenta Project were guests at the Slingsby Gin sponsored Ladies Day Trophy presentation- a promotion by Cowes Week Limited to again attract and promote women in sailing.

This year’s winner who received the Ladies Day Trophy and Slingsby Gin was Hannah Stodel who competes in the Sonar Class. She almost missed the presentation as she was involved in a race protest meeting. Hannah will sail a Sonar as part of Team GB at the upcoming Paralympics in Rio. She said that in being selected as the winner of the Ladies Day Trophy had given her a great boost for the Paralympics campaign. She particularly paid tribute to her mother who has helped her over the years in her sailing career. 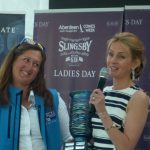 Kate Johnson on behalf of Cowes Week Ltd. paid tribute to all the nominees for the Ladies Day Trophy and welcomed guests, including past winners to the presentation. For Ladies Day it had been proposed that ladies should wear the traditional navy and white stripes.  Those from The Magenta Project ,a number of whom had been Brownies, certainly joined in this idea with enthusiasm.