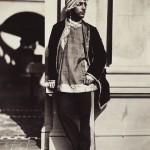 This half-term, 26 – 28th May, Queen Victoria plays host to a very special guest as she entertains the Maharaja Duleep Singh at Victoria’s Fabulous Fête at Osborne.

In 1854 the young Duleep Singh, the Last Maharaja of the Sikh Empire arrived in England. Queen Victoria invited him to stay with her at Osborne and he quickly became part of family life there. He spent time playing with the Royal children, the Queen had his portrait painted by one of her favourite artists Winterhalter and even sketched him herself. A marble bust of Duleep Singh along with paintings of him and his family, remain in the Indian wing at Osborne today.

During this event visitors to Osborne will be able to make the acquaintance of Her Majesty and the young Prince and join the party as the Victorian Circus come to Osborne. Daring horse riders will perform stunt displays, jugglers, musicians and sideshows will entertain and the 19th century inventors will amaze. Enjoy a nostalgic ride on the swingboats. Children can join in with a rifle drill or circus skills workshop and then have a family photo taken – Victorian style – as a memento of the day.