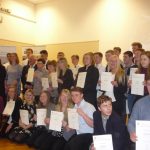 A record number of 59 young people from the Island achieved their Duke of Edinburgh’s Awards in 2016.

Sadly, nineteen were unable to attend the presentation evening hosted by IW College mainly due to illness. Guests were welcomed to the presentations by Lee Matthews (IW Council) and Natalie Woods (Chair of IOWDECA). Natalie reported on the special events that had taken place on the Island to celebrate the Diamond Jubilee of the Awards during 2016.

As 27 of the award holders achieved their awards whilst a student at IW College, it was appropriate that the D of E Leader at the College Terry Gaskin should be the compere for the evening. Terry said how all the participants had undertaken various tasks which help the Island’s community by completing voluntary work with charities or other local organisations.  They had all undertaken expeditions, learned new skills and participated in sporting activities.

IW Lord Lieutenant Martin White was kept busy as he handed out the awards. A great supporter of the scheme, he pointed out that 300,000 young people take part in the Awards in the UK each year. He gave recipients his best wishes for their future careers and encouraged those who had gained Bronze and Silver to go onto Gold. 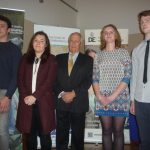 Of the five Gold successes Oliver Scragg from Newport Open Award Centre completed his hat trick of awards having gained both Bronze and Silver in the past. He managed to match his brother Sam who has also achieved all three awards.

Oliver’s expedition took him to the Lake District. Commenting that he knew now how to dine well as by his third attempt he insisted porridge was the answer!

Like his brother he undertook sailing. He was none too happy though with the early morning starts with the Wayfarers Cycle Group, but their Cake Break was most welcome, he insisted.

There were two successes by Sandown Bay Academy students now both at university. Alice Lyons went to the Lake District for her expedition while James Stirling undertook life guard duties and playing in a band.

Unfortunately Amelia Risling from Island Innovations 6th Form was one of those unable to attend to pick up her Gold Award.

One of those receiving a Silver Award was Justine Watson a member of Girlguiding IW. 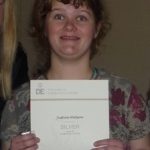 Prior to the presentations Councillor Jonathan Bacon, Isle of Wight Council leader, said: “I offer my congratulations to all the young people who will be receiving their DofE awards and it is great to see Isle of Wight students embracing this scheme. It is very important as it adds so much to the development of students.

I would encourage young people who are thinking about doing a DofE award to register and take part. You could find yourselves helping people in the community, getting fitter and developing all sorts of skills outside of the classroom.”

Anyone aged 13 to 24 can enrol for the DofE. To do so, they should email carol.taverner@iow.gov.uk.