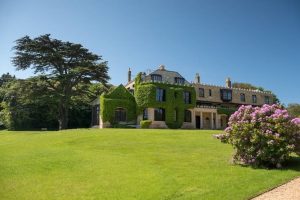 David Thornton, CEO, Visit Isle of Wight said: “The Literary Heroes Trail is an inspirational trail which takes visitors on a journey across the Island, discovering locations where celebrated writers went on holiday, spent their childhood days and the places that meant so much to them.Visitors can navigate their way around the Island using an interactive map and pick and choose from a host of Island spots linked to the literary greats; from tucked away villages and hamlets to bustling seaside towns. This trail also reveals some of our home-grown talent, including Oscar winning screen writer Anthony Minghella who wrote The English Patient.”

A major highlight of the Literary Heroes Trail is newly re-opened Farringford, Freshwater, (pictured above) where the renowned poet Alfred, Lord Tennyson made his home. Since 2012, the dramatic Gothic house has been meticulously restored and decorated in a late 19th Century style that reflects Tennyson’s tastes and interests. Its grounds have also been returned to their authentic Tennyson-era appearance complete with enchanting walled garden.

Other key locations include the picturesque sailing village of Seaview, where author Enid Blyton took holidays; and the traditional seaside resort of Ventnor, where Charles Dickens rented Winterbourne, Bonchurch and described to his wife “It is the prettiest place I ever saw in my life.”

Author, Lynne Truss,  a regular visitor to the Island edited the new Literary Heroes Trail leaflet. Lynne comments: “I’m not the first writer to be inspired by this jewel of an island. Writers have breathed the air here, walked the cliffs and gazed at the glittering sea – and then dashed home to put pen to paper.”