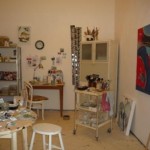 Since moving from London to the Isle of Wight in late 2003, British abstract artist Lisa Traxler has produced an imposing body of work in a series of venues on the Island. This work has been exhibited both on the Island and around the world including London and Hong Kong. In 2012 Lisa’s exhibition ‘Lives and Spaces’ showing four very large enamels was at the West Gallery, Quay Arts Newport.

It is in this gallery that a selection of her output has been gathered together for a collection entitled ‘Decade’ celebrating her ten years on the Island.

Lisa’s exhibition comprises recent new works plus a number of pieces loaned from private collections for the duration of the show which runs until 22nd November.

As the gallery is named in honour of Mike and Christine West it is appropriate that their daughter Carinthia owns one of Lisa’s works of art and Carinthia was one of the many guests to the opening of the exhibition.

Lisa studied at Croydon Art College before graduating from Birmingham with BA Hons. in Fashion and Textile Design. Jobs in Fashion editing and costume design followed.

During her decade on the Island the artist has worked in a variety of different studios starting out here aboard a houseboat in Bembridge. Lisa also utilised an old warehouse in Wootton before moving to Quay Arts’ Jubilee Stores Studios on Newport Quay.

Along the way she was invited to be Artist in Residence at Portsmouth Grammar School in Spring 2008 and another residency had her working in Southsea.

A major change came about in 2010 when Lisa and her architect partner Linc moved into a property in Quarr which they converted. Featuring a purpose built Grand Design studio their efforts were the subject of a Channel Four programme.

Having now vacated that space Lisa now works from a WW2 Nissen Hut in South Wight.

As part of ‘Decade’ Lisa, a member of NAPA (National Acrylic Painters Association), has written and published a book chronicling her ten years on the Island and a feature of the exhibition is a reproduction of Lisa’s working studio. (pictured above)