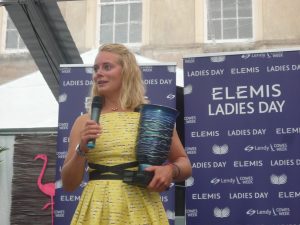 Cowes Week Ltd are delighted to announce that Title Sponsor, Lendy, have put their support behind Ladies Day plans for 2018.

In the year marking 100 years since women were given the vote, Lendy Ladies Day will return to the regatta on Tuesday 7th August with a celebration of female talent on the water to inspire more women to take up sailing as a sport and there will be activities for ladies ashore too.

The 1851 Trust are organizing special workshops all week but on Ladies Day the workshops will have the title od “Girls That Can”. Members of Girlguiding IW have been invited to these workshops and this should be fun for all the girls.

Lendy Ladies Day 2018 will culminate in the presentation of the Ladies Day Trophy at an evening reception, which will be attended by famous faces from the world of sailing, as well as celebrity and VIP guests.

“Commenting on its support for Ladies Day, Liam Brooke, CEO from Title Sponsor, Lendy, said, “We are so delighted to be the official sponsor of Ladies Day at Lendy Cowes Week 2018. Lendy Ladies Day is a high point of the week-long regatta, with its focus on celebrating the amazing achievements of female sailors. It’s easy to forget that up until nearly 30 years ago, women competing in the sport was almost unheard of. We’re very proud to be sponsoring the day and hosting the evening reception at which the Ladies Day trophy will be awarded.”

Red Funnel has been an Official Supplier to Cowes Week for the past 17 years and due to the success of the partnership the relationship has been extended for a further three years. Recently it was support from Red Funnel that enabled Girlguiding IW to secure 772 pounds for funds.

Lendy Cowes Week attracts over 100,000 visitors and Red Funnel plays an important role in bringing a large number of competitors and visitors to the Isle of Wight during the week via its High-Speed Red Jet and vehicle ferry services to Cowes and East Cowes.

Fran Collins, Red Funnel’s CEO said “Lendy Cowes Week is a unique regatta and we are delighted to continue our long- term support. In a bid to encourage more young sailors to take part this year, we are offering a 33% discount to crew members aged 16-25 and a special £8 return fare for visitors coming over from Southampton for evenings.

This summer also marks the entry into service of Red Jet 7, our brand new High-Speed vessel which will enable a record 825 people per hour to make the 23 minute crossing from Southampton to West Cowes at peak times.”