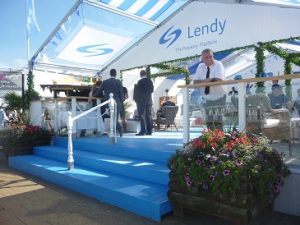 There have certainly been some highs and lows in weather conditions during Cowes Week, the first of three to have Lendy as title sponsor. Lendy’s pavilion, styled as the ‘Lendy Lounge’ gained approval as soon as it was erected. Visitors commented how light and airy it was as well as being welcoming. It was designed and erected by a company which has been in the show pavilion business for some time but had recently relocated on the Island, running the business from here.

Lendy staff entertained guests in the ‘Lounge’ throughout the week and Paul Riddell from Lendy said that Lendy were really thrilled to support an already well established and well- run event. The whole feel of the event was welcoming.

Throughout the week Northwood House and its grounds played host to various events. 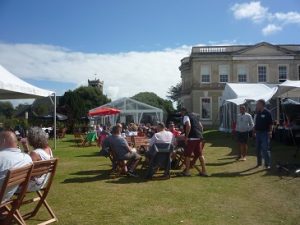 One of the most popular was the Gin Festival with 50 different Gins on offer including the Island’s own Mermaids which is distilled at Ryde. However, Cowes Yacht Haven was the venue for more Gin tasting with the arrival of Salcombe Gin from Devon. As sailors came ashore a taste of Salcombe Gin was there to greet them. According to the makers it is ‘Devon Dry’ and made with water from Dartmoor together with Macedonian juniper, English coriander seeds and fresh citrus peels. Every Gin is so different, Salcombe, rich on citrus, is certainly worth trying. For anyone wanting the full Gin experience Salcombe Gin offers a Gin School where you can not only learn about and taste Gin but create your own in a mini copper still.( See the Salcombe Gin website for details.)

Lendy Cowes Week’s official charity the Andrew Simpson Foundation (ASF) had a well- positioned stand on the Parade offering information and the chance for young people to enjoy free sailing with an instructor. Entitled, ‘Discover Sailing- supported by Lendy the attraction proved popular and during the week was promoted by CEO of the Andrew Simpson Foundation, Richard Percy and Olympic medallists Iain Percy OBE and Hannah Mills MBE. Although Monday was charity day monies were raised for ASF during the week at various events. 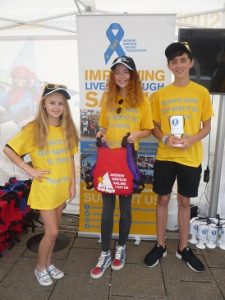 Iain Percy was invited by Lendy Cowes Week and the RYS to fire the start gun for Cowes Bash.  As a reminder of why the Foundation was formed and in a nod to the global fundraiser ‘Bart’s Bash’, results from all fleets were pooled to find an overall winner for the day. Winner of Cowes Bash was Sam Cox on Nifty who picked up a free entry into next year’s Lendy Cowes Week plus Chatham Shoes for the crew. Members of the public also had the chance to win Chatham shoes in daily competitions via Cowes Week Radio and obtained from the Chatham stand on Cowes Parade. 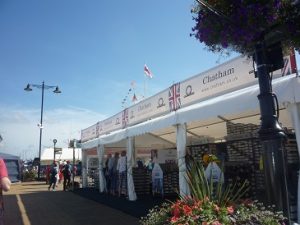 Cowes Week Radio had a new presenter and on the water commentator with Matt Sheahan joining the Cowes Week Radio team. Commentary on the racing is broadcast whenever racing takes place interspaced with music and news on 87.7fm. 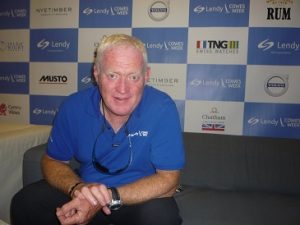 On Elemis Ladies Day all ladies were invited to dress in the traditional navy/white stripes. There were various takes on this theme with  Elemis prizes for some, both on and off the water. 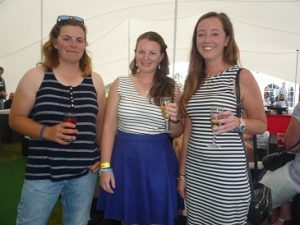 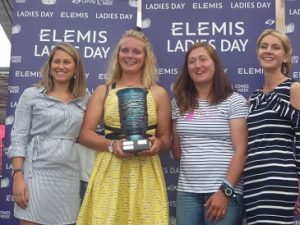 Annabel was sailing at Lendy Cowes Week on Bullit in the Quarter Ton class with well- known Cowes sailor Louise Morton. Annabel said, ‘It is really amazing to have won this fabulous award. I sail on an all- female boat with Louise (winner of the Ladies Day Trophy in 2010) who has essentially given me all my sailing opportunities as I sailed with her on her previous boat Espada and I know that she was among those who nominated me. I hope to be selected to sail on Team Brunel in the Volvo Ocean Race.’ As well at the Ladies Day Trophy, Annabel received a generous ELEMIS gift bag and a TNG Baltic Cup Lady watch.

Over three days of the regatta some of the largest boats took part in the Sevenstar Triple Crown. On day two there was an Around the Island Race. Two World speed sailing records fell, subject to ratification by the World Speed Sailing Record Council, with the Spanish Volvo Ocean 65 Mapfre completing the 50 mile course around the Island in 3 hours, 13 minutes and 11 seconds, setting a new outright around the Isle of Wight world record by a monohull yacht.

Her time was 6 minutes 58 seconds ahead of that set by Mike Slades’ 100ft ICAP Leopard in 2013. Unlike the Volvo Ocean 65s, ICAP Leopard has powered winches. Mapfre therefore also beat the previous world record for a monohull without power assistance by an impressive margin of more than 36 minutes. Propelled by winds gusting to 40 knots on the south side of the Island the next three boats in the race, Team Brunel, Team Akzonobel and Dongfeng Race Team also beat the previous record times. After further racing on Thursday trophies for the Sevenstar Triple Crown were awarded with prizes for the series some of the most prestigious trophies in the sailing world. Mapfre won a special trophy in recognition of her success in the Around the Isle of Wight race.

There had been some tight racing over the week in the Sunsail Match 40 and Lendy Financial Challenge Series with prizes each day for the winning crews in both competitions. Regatta sponsors Lendy, entered a crew and notched up some good performances as did a local team representing Red Funnel who had ‘Ted Funnel’ with them for Good Luck. 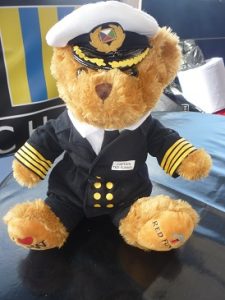 Friday’s race was tight with the leaders only 10 seconds apart at the finish seeing Lendy first across the line, followed by The Alliance and Deloitte Green. However, overall winner of the Sunsail Match 40s was Cyberark with Gurnard based skipper Matt Middleton-Leal four points clear of Tenzing Private Equity and Deloitte Green third. 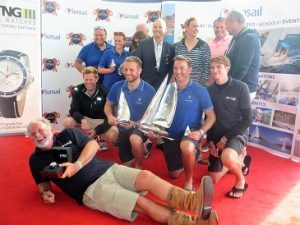 Nine boats within the class were in the Lendy Finance Challenge open to any company in the Finance Industry. Going into the final race Lendy was leading the series with 12 points, ahead of Deloitte Green on 18 points and the last win by Lendy sealed the overall award. 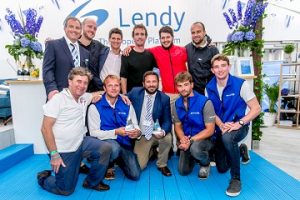 ‘Bruce’ James King from the Australian team The Alliance said how he had enjoyed his racing in Cowes in what he considered the home of yachting. He had taken part in Geelong Sailing Week, one of the oldest sailing regattas after Cowes Week and was now able to compare the two. ‘I will be back’ he said.

Overall winning yacht at Lendy Cowes Week was ‘Whooper’ and the display by the Red Arrows and the Firework display were much enjoyed by the crowds packing Cowes Parade. 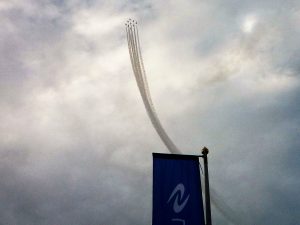