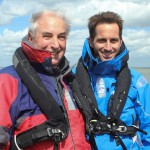 Could Sir Ben Ainslie be the first yachtsman to hold both the multihull and monohull RTI course records?

Race organiser ISC is delighted that the four time Olympic gold medallist and America’s Cup winner Sir Ben Ainslie is returning to participate in this year’s J.P. Morgan Asset Management Round the Island Race.  Recently Ben met with ISC Commodore John Dudley to show his support for the Race.

Sir Ben Ainslie said “The J.P. Morgan Asset Management Round the Island Race is an event that the whole UK sailing community looks forward to each year. What makes the Race special is the ‘Race for all’ ethos in that no matter how big or small your boat, everyone is racing on level terms.

Last year’s Race was particularly special for me, we [Ben Ainslie Racing] broke the multihull record in honour of our great friend Andrew Simpson and this year we have been invited to sail with Mike Slade on his Maxi Yacht, Leopard. It’s a fantastic boat and one that I have wanted to compete in the race on for many years.”

Mike Slade added “We have been competing in the Race for over twenty years and each year offers different and intriguing challenges. In that time we have managed to break the Race monohull record on five occasions, including last year’s near-perfect Race conditions that allowed us to shave 10 minutes off our previous record in an elapsed time of 3 hours 43 minutes and 50 seconds.

What makes the Race so special are the thousands of sailors that compete. It is a wonderful sight to see over 1,600 boats all competing hard to achieve their best time. This year I was delighted to invite Sir Ben to co-helm Leopard.  We have sailed together previously and that proved memorable and I’m hoping for another notable sail. Ben is one of the true greats of British sailing and Leopard and her crew are looking forward to welcoming him on-board.”

Prior to his visit to the Island Sir Ben has been in the news with the launch of his bid to win the America’s Cup the 163-year old trophy never won by Great Britain. He plans to take the trophy from the Americans in 2017, and bring the America’s Cup back to Britain with his team, Ben Ainslie Racing (BAR).

The Duchess of Cambridge attended the launch at the Royal Museums Greenwich to show her support for the campaign as did other members of the BAR Board and Board Chairman Sir Charles Dunstone who is often in Cowes for regattas.

The BAR team announced that it will be representing Yacht Squadron Racing, which is affiliated to the Royal Yacht Squadron, and it means that should BAR be successful and win the Cup for Britain it will bring it back to Cowes  the place where it all began 163 years ago.