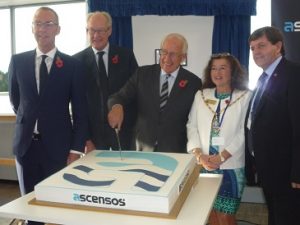 Ascensos, a Contact Centre based in Cowes, was officially opened by Her Majesty’s Lord-Lieutenant of the Island, Major General Martin White CB CBE JP on the 1st of November. He unveiled a plaque at the new facility which has been established to manage inbound telephone, email, social media and online queries for a range of blue chip retailers, including Argos, JD Sports and B&Q. After unveiling the plaque he said that one indicator of the arrival of Ascensos was the improvement in the jobs market.

Also attending the official opening  ceremony was  a selection of staff from the 340 new recruits who have joined Ascensos since operations started on-site in September together with representatives from the IW business community and the Chairman of IW Council Lora Peacey-Wilcox. 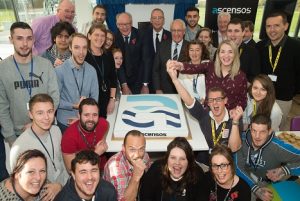 John Devlin CEO of Ascensos said it was a long journey to reach this landmark day. He recalled a conversation he had had in 2012 with Paul Sandford, a friend who had moved to the Island.

During their chat the idea of there being a contact centre on the Island was discussed. John said that five years on they were seeing the culmination of that strategy.He was really impressed by the welcome they had received on the Island and by the standard of their new recruits.

IW Council Leader Dave Stewart thanked Ascensos for putting their faith in the Island and praised the role of the regeneration team on achieving their commitment.

Dermot Jenkinson, executive chairman of Ascensos said they were a private company, with no external pressures of how to perform. He commented ‘We will support you and we hope you will support us.’

Ascensos has invested over £1m in the new facility with additional support from the Isle of Wight Council, who have valued the benefit of the project to the Island’s economy at £35m.

Ascensos now operates one contact centre in Motherwell and two in Clydebank, along with operations in the Netherlands and Romania, employing a total of 1,640 staff. This Isle of Wight facility is its first UK operation outside Scotland and, once fully operational, will make Ascensos one of the island’s largest employers. 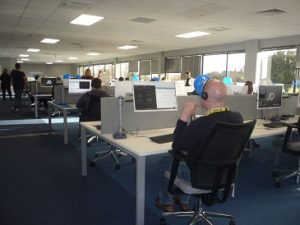