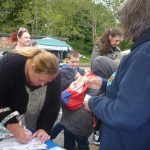 Members of Girlguiding IW joined other Isle of Wight charities for the 2016 edition of Riverfest.

Held along the quay side at Newport Harbour this popular event attracted thousands of visitors but not quite so many this year due to poor weather. However, the Girlguiding IW stand attracted a steady flow of visitors. With activities for children, free gifts, information for volunteers and new members and this year’s popular attraction: the chance to win 2 IW Festival Weekend Camping Tickets (kindly donated by IW Festival organisers) in a prize draw.

Other popular prizes were also on offer in the draw including vouchers for Wightlink Ferry Tickets and Cream Teas and Rounds of Golf at Browns Golf Course, Sandown.

Over 250 tickets were sold during the morning session alone and despite the weather, or perhaps because of it as visitors were pleased to shelter in the Girlguiding IW gazebo, Lesley Clifford one of the Girlguiding IW Island Commissioners said,”I am pleased with the interest the public have taken in Girlguiding and the IW festival tickets have certainly been a great attraction.” 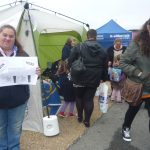 Riverfest was opened by the arrival of a tall ship full of pirates which had sailed up the River Medina until it reached Newport Quay. Cannon fire was heard but no one was hurt or captured as far as we know!

Riverfest is organised by The Footprint Trust and held every year during May and it is a great way for charities to connect with the public. 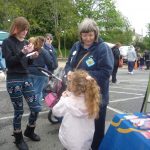 The draw for the IW Festival Tickets and all the other prizes will take place at a coffee morning to be held at Browns (Golf Course) Cafe on Sandown Esplanade on June 4th at 11am.-See you there!