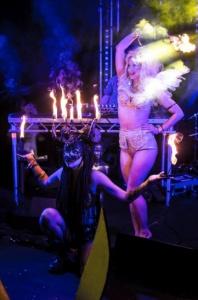 Cirque De La Quirk returns to the Isle of Wight Festival 2017 with a new and exciting festival experience including headline performances from Stanton Warriors, Krafty Kuts, Dub Pistols and Sam and The Womp. Festival goers will have the chance to step into a worry free and nonsensical world. In previous years acts have included live body painting, dance offs and sock wrestling and 2017 is promising to be bigger and better.

Members of Cirque De La Quirk explain this year’s out of this world theme:

Our whirlwind of Cirque de la Quirk will be back this year with a vengeance! Picking up where we left last year, the Cirque will be camping up the immersive festival experience.

Our world will plunge you into a community embracing style, individuality and rebellion. In this territory there are two factions. Will you be the eccentric aristocrat or the rowdy rebels?

The Nostalgias; steeped in etiquette and dressed to the nines, the closest thing to aristocracy that anyone could hope for. They enjoy their own company but due to their impulsiveness, their rash and emotive nature they can even rub each other up the wrong way, let alone the other side.

The Mechanicals are a very different animal. Where the Nostalgias shut themselves away with sofas and mustaches, the Mechanicals are curious schemers who reside in the wooded area. They were once the scientists, mathematicians and geniuses of this world but their time in the wasteland and endless need to solve everything that has gone wrong has had an effect. Their yearning for answers has shifted and their thirst for knowledge has been replaced by a thirst for anarchy.

The life loving population will try to make you sway from one to the other and when chosen you can pit your wits against others in a feast of games, puzzles and activities throughout the weekend. Fun for all ages, the music and performers will allow you the chance to try your hand at being a circus master or sock wrestling champion – put to the soundtrack of, squelchy beats with a bit of kick every evening!