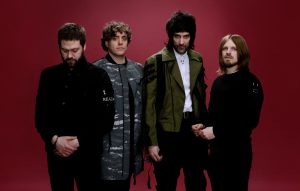 Kasabian, headliners on Friday night (June 22nd) at this year’s IW Festival, were formed in Leicester in 1997 when known as Saracuse. They are classed as an Indie Rock/Electronica/Electric Rock band. A title disliked by band member Sergio Pizzorno.

Prior to their appearance on the Island they will be touring South America during May promoting their latest album ‘For Crying Out Loud’. Shows are planned in various South America venues including Rio on the 18th May and Buenos Aires on the 21st.

Band members comprise Tom Meighan-vocals, Sergio Pizzorno-guitar/vocals, Chris Edwards-bass and Ian Matthews- drums. Prior to Ian Matthews joining the band as drummer they used a number of session drummers following the departure of Chris Karioff in 2006.

Headlining Glastonbury in 2014 they played the IW Festival in 2011 when they closed the Sunday night.