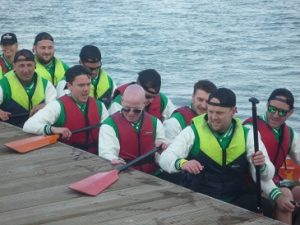 For the third annual Isle Of Wight Festival Dragon Boat Race  held in support of Stand Up To Cancer 14 teams took part. So far the festival has raised over £90,000 for the charity. Special guests this year were  James Walsh of  Starsailor and Keith Duffy and  Shane Lynch of  Boyzone.
The Wightlink team won the race overall against tough competition from the thirteen other teams. In the final ‘paddle-off’ the four teams were: Wightlink, two Island teams- Connor Construction and Island Harbour and Unbranded- a mainland events company which does a lot of work on the Island.
In a race against the flowing tide of the River Medina, Wightlink completed the course in 1:14 closely followed by Connor Construction just 1 second behind . Island Harbour were third in a time of 1:29. Awards were presented to the winning team and runners up by Keith Duffy. 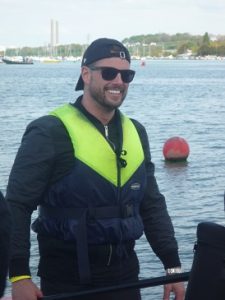 John Giddings, Organiser of The Isle of Wight Festival said:  “It’s fantastic to be back at The Isle Of Wight Dragon Boat Race, and to be partnering with Stand Up To Cancer once more. There has been an incredible atmosphere down here today, it’s great to have such huge support for an incredible cause.”
The Isle of Wight Festival 2017 and Stand Up To Cancer, played host to The Dragon Boat Race once again at Island Harbour on April 27th. Bringing together local and national businesses and enterprises to raise money to fund cancer research.

This is the third time a race of this kind has taken place on the island, with companies competing on the water and enjoying a day of entertainment at Island Harbour.

Collectively ,so far this year, the Isle Of Wight Festival has raised over £90,000 for Stand Up To Cancer. 100% of the money raised will go towards ground breaking cancer research designed to speed up the process of taking breakthroughs from labs to patients and help improve survival rates.

John Giddings is supporting The Cowes Ladies Football Team, a new football team for the Island, and was pleased to give then extra support for their Dragon Boat heat. 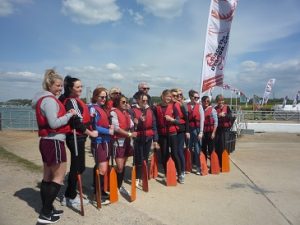 Rachel Carr Head of Stand Up To Cancer, said: “We are really proud of our continued partnership with the Isle of Wight Festival and massively value their support. As always, the atmosphere today was incredible and we are so grateful to everyone who took part today and all our amazing volunteers who help make days like this possible.” 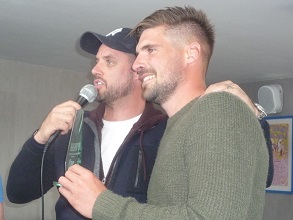 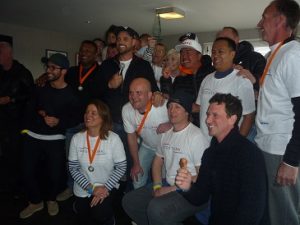