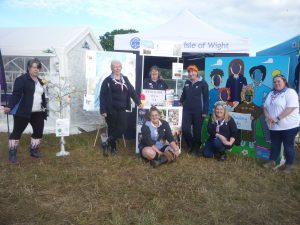 Over the four days of the IW Festival local charities had stands in ‘Penny Lane’. These ranged from Mencap (Haylands Farm), Dimbola and St. Catherine’s School to Girlguiding IW. Every evening the Girlguiding members appeared with what seemed an endless supply of Marshmallows. 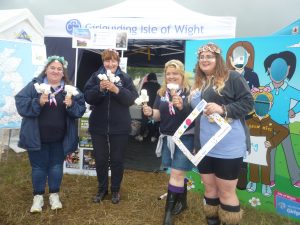 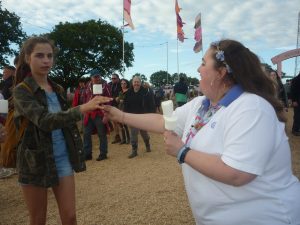 Girlguiding IW Commissioner Lesley Clifford said, “By giving away over 2,000 Marshmallows to festivalgoers we are showing good will to all who attend the festival. We hope they enjoyed the weekend.”

During each day Girlguiding IW offered festivalgoers a range of activities including the ever popular ‘Map pin-board’ where everyone who has been or is a member of Girlguiding could mark their unit location. 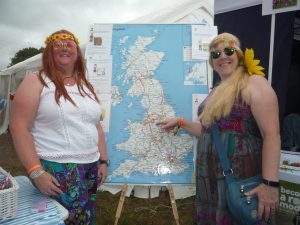 New for 2019 was the comic photo-board where everyone could become a Rainbow, Brownie, Guide, Ranger or leader for a few minutes, even the males! 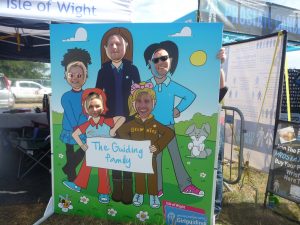 To round off the four days of the IW Festival the intrepid band of volunteers appeared on stage following a special request from organisers. Not the Main Stage or even the Big Top but the stage of Old Mout Cider and without a drop of cider passing their lips performed a traditional Girlguiding song. This went down a storm with the Old Mouters. A new experience for all concerned especially Mr. Pineapple! 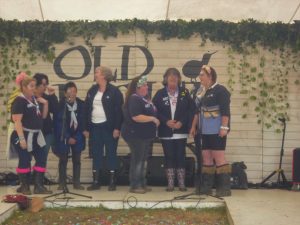 A firm favourite at the Isle of Wight Festival, Kashmir Café was run by a passionate team of Island volunteers, with all profits donated to Quay Arts. If you attended the IW Festival this year perhaps you checked out the Kashmir Café with an intimate stage and riverside garden. With local beers and plenty of local talent it was one of the places to be. Away from the IW Festival site in its usual home at Quay Arts Café the food team, over the weekend, served up delicious breakfast buffets from 9am – 3pm enabling festivalgoers to pit stop to refuel. 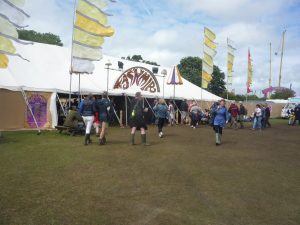 Opening this year’s IW Festival in the Big Top and In homage to the visit of Bob Dylan to the 1969 IW Festival, SIMPLY DYLAN, styled as “A Tribute to Bob Dylan, Not A Bob Dylan Tribute,” is John O’Connell’s personal exploration of the rich and diverse work of Bob Dylan. John who plays acoustic guitar, harmonica & banjo as well as vocals, is part of Liverpool’s music scene and collaborates with other musicians from the city to form his Dylan Band.
It is their precise playing and high energy renditions of Dylan’s work from the 1970s onwards which has gathered momentum and generated incredible interest. From a modest project recognising Dylan’s 70th Birthday in 2011 Simply Dylan has gone from selling out the Cavern Club 6 times to impressing Dylan fans from across the UK on their Tours. 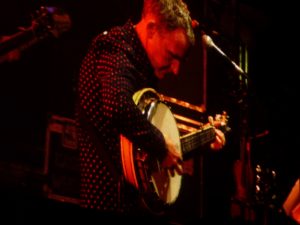 After saying that they had never done anything like this before John O’Connell and the other members of Simply Dylan played a full version of ‘Hurricane’ and included ‘Positively 4th Street’ ‘Forever Young’ and ‘Like a Rolling Stone’. Perhaps John’s performance would have been improved by less volume from the backers and a slower delivery.
After the rain on Thursday which led to a fairly soggy Seaclose Park and surrounding fields, over night piles of wood chippings appeared on top of the mud and what remained of the grass enabling the festivalgoers to move around more easily. With sun and a stiff breeze off the river most of the site dried out to welcome thousands of visitors on Friday.
Funfair rides, the VUE wheel and other entertainments including the Beatles Experience, where Abbey Road was recreated, proved popular before the stage performances began. Headlining on the main stage was Noel Gallagher with Oasis back catalogue songs of his featuring heavily. Ably assisted by his High- Flying Birds Noel ended his set by paying tribute to the Beatles with a rendition of ‘All You Need Is Love’ which was written by Lennon and McCartney in 1967.
Speaking with Absolute Radio, official radio station of the festival, Noel told of his experiences whilst travelling to the Island as well as discussing his brother.
A mixture of sunshine and showers greeted festivalgoers on Saturday. In the afternoon a competition for those wearing clothes in the style of1969 was held. Hundreds were seen in various styles for the ‘Peace and Love 1969’ theme.
James drew an appreciative audience for their early evening slot on Saturday, with an impromptu dance performance on stage by TV presenter Fiona Bruce.
George Ezra headlined on the main stage on Saturday despite sustaining an ankle injury whilst out on a run the day before. With the main arena very full and rain keeping off his performance ended with fireworks which thrilled the audience.
Everyone thought that Sunday would be a wet day but following early morning rain the day stayed dry for most of the time with some warm sunshine from time to time.
Madness filled the tea-time slot on the main stage. A packed arena with closed gates at times showed just how popular Madness are with all ages of festivalgoers. Their usual up-beat tempos had the crowd on the move and the whole of the festival site came alive when the crowds moved on to their next choice of performers. It was just a sea of movement across the site.
With Jess Glynne unable to perform the evening’s schedule was changed. Biffy Clyro ended the festival with renditions of most of their well-known hits and of course there were fireworks.