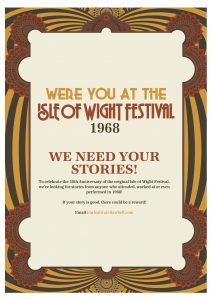 To celebrate the 50th anniversary, the Isle of Wight Festival 2018 are asking anyone who attended the iconic 1968 event to come forward and share their experiences. Whether pulling pints for T-Rex or meeting the love of their life whilst watching Jefferson Airplane – all stories can be submitted via iowfestival@dawbell.com.  Any festival goers whose stories are used as part of the celebrations will receive rewards relating to this year’s festival.

In 1968 The Isle of Wight Festival took place from August 31st to September 1st 1968 (Bank Holiday Weekend) at Ford Farm which is located between Godshill and Whitwell and featured performances from Jefferson Airplane, Arthur Brown, Tyrannosaurus Rex, Fairport Convention and The Pretty Things. Over the next couple of years the festival went to on to become world renowned for iconic performances from artists such as The Doors, The Who and Jimi Hendrix.

The IW Festival was successfully relaunched in 2002 to become one of the most exciting weekends of the summer, continuing to build on its proud heritage with show-stopping headliners such as The Rolling Stones, Paul McCartney, Coldplay and Fleetwood Mac.

In honour of the festival’s ‘Golden Jubilee’, all attendees are invited on Saturday 23rd June to adorn themselves in gold for a weekend of fun and celebration. Expect to see sparkling divas, shining stars and victorious gladiators come together for this year’s 50th anniversary.