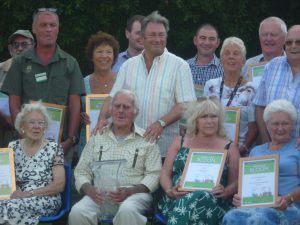 This year’s Wight in Bloom Awards came to a climax on Tuesday when the presentation ceremony was held at the Green House, the renowned energy saving HQ in Ryde of Liz Earle.
Ian Griffiths, Chairman of Visit IOW welcomed guests and said that there had been 110 entries this year. Judging took place between June and July, with 20% of the points available attributed to sustainability.
Southern Vectis was the main sponsor and general manager Richard Tyldsley referred to the fact that buses are green as are gardens and you get good views of gardens and courtyards from the top deck of a bus.
Alan Titchmarsh MBE, (pictured above with some of the winners) Patron of Wight in Bloom was on hand to present the prizes saying that he always enjoys places that have good gardens and he was really pleased to see entries from children and younger people.
Following the presentation on Tuesday evening Alan was on our Tv screens when a new series of ‘Secrets of the National Trust’ began its run on Channel 5. He revealed that the first episode featuring Petworth House boasted no less than twenty paintings by Turner, more than any gallery. Of course, gardens feature heavily in NT properties as was evident in these local awards.
Small Front Garden: 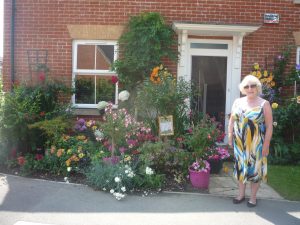 Won by Sandy Crump of Newport- A real show- stopper with a variety of plants and shrubs. Sandy said that the answer lay with plenty of manure spread across the plots early in the year. Natural material is so much better than purchased fertilisers.
Large Front Garden: Described as a lovely garden with a huge range of trees including oranges and lemons which are moved indoors in Winter. A credit to Francis Brett from Binstead.
Small Tourist Attraction: Head gardener Robert Moore and his volunteer team at Mottistone Manor (NT) should be applauded for a successful regime of sustainability with minimal watering and their creative gardening.
Large Tourist Attraction: Robin Hill Country Park scored highly on sustainability. Its essence is some wonderful planting.
Small Commercial Garden: This category featured a battle between three properties in Shanklin. Overall winner of the category was The Clifton, which was described as a delightful, well-established seaside hotel with no empty garden spaces and an emphasis on wildlife.
Large Commercial Garden: Joint winners were featured in this category- The Royal Hotel, Ventnor was deemed a great demonstration of a national jewel whilst Haven Hall, Shanklin was a delight featuring landscapes, seascapes and roaming chickens.
Pride of Place (Community Garden): Bembridge War Memorial Garden had an excellent impact with interesting and innovative planting which was very well maintained.
Young People’s Initiative: Pupils at St. George’s School, Newport created a new garden in a formerly austere area.
Best Edible Garden: When judges visited some Ryde Allotments last year Keith Bloomfield’s nearby plot caught their eye and they advised him to enter in 2019. So, it was no surprise that his tremendous effort and innovation was rewarded this year.
Container Garden: This section had the most entries with sixteen. Mr. & Mrs. Smallman from Shanklin took the honours with their entry which was brimming with bees and butterflies on judging day.
Care-giving Complex: With little resources a small grey corner of Clifton House, Cowes has been transformed with colourful planting and innovative recycling of containers.
Judges awarded Jeane Minx from Ventnor with the Hidden Gem Special Award for her efforts.
Ninety years young Francis Brett from Binstead was described as epitomising Wight in Bloom as he secured the Peggy Jarman Trophy as the overall winner.
His entry was an exceptional effort with an immaculate lawn and scented flowers. Only recently has he had a little help from his daughter but otherwise looked after the 1 acre plus on his own. 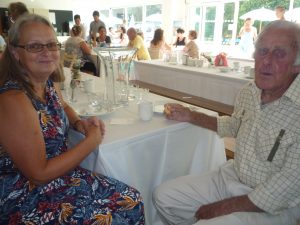 Francis (pictured with his daughter above) said that he liked growing both flowers and vegetables, but the former were easier to look after because a fox insists on attacking the veg.
Alan Titchmarsh ended proceedings by encouraging the audience to keep growing things with their forks, spades, hoes and trowels. 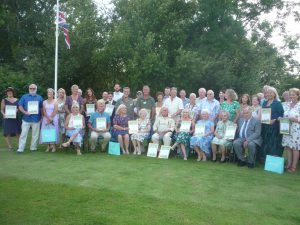 All the winners, Runners Up and Highly Commended participants with their prizes which included  Southern Vectis Bus Passes (15 day Key Cards) and Goody Bags of Liz Earle products. This competition is organised by VIOW with Southern Vectis as the main sponsor and takes place annually.

Will Myles, MD at Visit Isle of Wight said:

‘Recent research that Visit Britain put out showed that gardens and garden tourism is on the huge increase, and obviously, being on the Island, people refer to us as the Garden Isle, we are that green space, we are that place where people can come and recharge their batteries, and we’re the place where people can come and see all the great work that people are doing on the Island.’

Will explained the simple decision to move the awards from later in the year:

‘We moved Wight In Bloom forward from the autumn, so people can actually shout about what they’ve won today, shout that Wight In Bloom is part of it, and also the fact that people can come and see what’s there.’