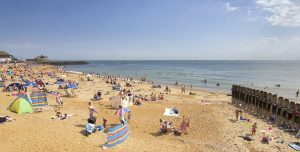 The Isle of Wight has made it to the shortlist in a major national awards competition- The BBC Countryfile Magazine Awards-  and the Island has been nominated for one of the top accolades featuring in the category of Holiday Destination of the Year.

It is now down to a public vote and Visit Isle of Wight is asking you to vote for the Island to take the top prize.

In the 2018 Countryfile Magazine Awards, the Island won over the public in two categories of Best British Beach and Best Village, with Sandown Bay and Bembridge taking the majority of votes in the high profile competition.

Will Myles, MD at Visit Isle of Wight says it is fantastic to be nominated: ‘We who are lucky enough to live here know that the Isle of Wight is a incredible place. There is something for the visitor all year round, from fantastic beaches, amazing events, brilliant attractions, beautiful towns and villages. Being recognised for the holiday destination of the year by BBC Countryfile Magazine just shows what we’ve got here and shows why we are up there again with all of the destinations in the UK’

Panelist and Countryfile presenter Tom Heap said: ‘I see a lot of the country in my job but judging these awards really opened my eyes to further beauty spots and admirable green schemes. So much more to discover. The scheme to reintroduce the White Tailed Sea Eagle has been shortlisted in the Wildlife Success of the Year category.’

To vote for the Isle of Wight as Holiday Destination of the Year, go to: https://countryfile.awardsplatform.com/entry/vote/vRqdDVJD?category=59073