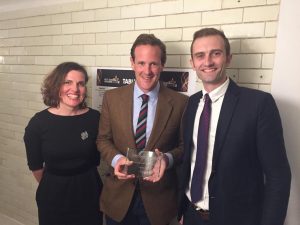 Abi (VIOW) with Tom and Dan from Tapnell Farm.

Tapnell Farm was triumphant at the Isle of Wight Radio Business Awards – in association with HTP Apprenticeship College – winning the Island’s Top Day Out award, sponsored by Visit Isle of Wight.

This award was presented at a ceremony at Albert Cottage, East Cowes.

Tapnell Farm took the trophy ahead of Robin Hill Country Park, Blackgang Chine, Rhythm Tree Festival and Island Gem Fossil Hunt in the closely fought competition, which saw some 3000 public votes cast in the category of Top Day Out.

“We’re delighted to be able to sponsor this award, it’s important that Island businesses are recognised for the hard work and effort they put into making themselves – and the Island – such a fantastic place to visit”